Iveco has won the 2023 Dakar Rally with Dutch driver Janus van Kasteren bringing the performance of his Iveco PowerStar with Cursor 13 engine to the top step of the podium.

UFI Filters boasts a historic collaboration with the Italian manufacturer of commercial vehicles and heavy-duty vehicles, for which it supplies high-efficiency filtering solutions as Original Equipment to support its powerful engines such as the Cursor 11 and 13.

Divided into 14 stages, this 45th edition of the Dakar Rally took place in Saudi Arabia from 31st December to 15th January; the participants faced a competition area equal to a total of 8,500 km which wound from the Red Sea to Damman, on the opposite side of the Arabian Peninsula. 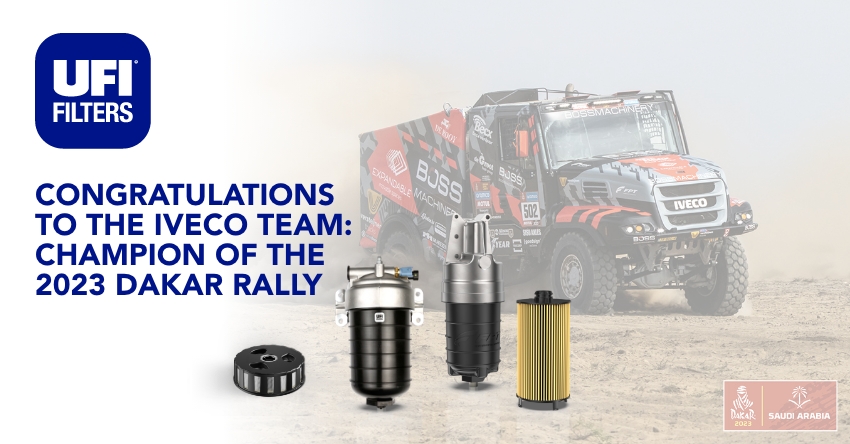 For Iveco this is the third victory in the history of the Rally after those of 2012 and 2016 and this year’s engines, specially designed by FPT Industrial, were capable of delivering up to 1,000 HP of power.

For its on-road engines, Iveco has long relied on the technology of UFI Filters, already renowned for its OE Pedigree, as evidenced by the supply of filtering solutions such as diesel, oil and blow-by filters as Original Equipment.

The complete UFI fuel filter fitted as original equipment guarantees high filtering efficiency, as well as suitability for bio-diesel and high performance up to 150,000 km.

Its robust housing is made of plastic making it lighter at the same time. The filter element, easy to replace, is composed of a media of cellulose fibres coupled with synthetic fibres, according to the exclusive FormulaUFI.H2O, which guarantees a filtering efficiency of over 95 per cent for particles up to @4μ, according to UFI.

The spare part is also available in the aftermarket catalogue with the code 26.044.00.

In addition to the PowerStar, this filter also equips applications such as the Iveco S-Way and X-Way with Cursor 13 Euro 6 D engine.

Among the most important filters that UFI has developed as original equipment for Iveco is the patented oil filter, designed to support the powerful Cursor 11 and 13 Euro 6D engines, which equip models such as the PowerStar, the Stralis S-Way and the X- Way.

The spare part for this is available in the aftermarket catalogue with the code 25.169.00.

UFI says its oil filter is able to guarantee high oil cleanliness as well as excellent lubrication of the engine components, preventing wear.

It consists of a sturdy aluminium support with a patented coupling to the motor body. The plastic cap, on the other hand, helps to improve the degree of elasticity, lightness and tightness, thus allowing it to withstand pressures of up to 13 bar.

The filter media, composed with the exclusive FormulaUFI.Stratiflex, is made of a material that combines layers of cellulose and synthetic fibres with glass fibres in a pleated multilayer. This particular filter media is able to block the micro-particles of “soot” ensuring high performance up to 150,000 km.

Another important filter fitted as original equipment is the UFI rotary blow-by filter. Its function is to recover the oil vapours generated by the engine in the combustion chamber.

For this filter, UFI Filters has chosen to use a media in FormulaUFI.Micron, made of synthetic material and coupled with glass fibre in order to be able to withstand the high degrees of saturated acidity of the oil vapours.

Despite its compact size, this filter, in addition to being self-cleaning, guarantees high filtering efficiency and low pressure drop.