Nottingham City Transport (NCT) has taken delivery of its first of a new batch of 23 bio-gas double deck buses in a £7m investment.

The engines and chassis of the Enviro400CBG City buses have been developed by Scania and are bodied in Britain by Alexander Dennis Limited (ADL).

All 23 are expected to be in service by the end of August. NCT already operates the world’s largest fleet of bio-gas double decks in the world at 120 buses. 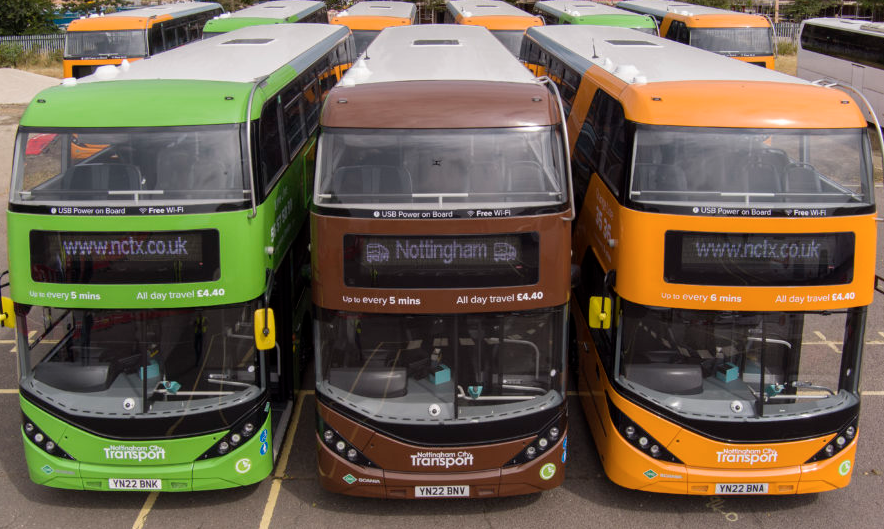 Bio-gas buses already run on three quarters of NCT’s double deck services and the current fleet has clocked up more than 15 million miles in service since first appearing on Nottingham’s streets in July 2017.

NCT says its existing bio-gas buses have prevented more than 26,000 tonnes of CO2 being emitted, as well as reducing NOx emissions by 180,000kg.

Bio-gas is produced naturally through anaerobic digestion, using food waste, farm waste and sewage, and the methane emitted from the digestion process is captured, treated and turned into fuel.

Liam O’Brien, NCT’s head of engineering, said: “NCT is committed to minimising its impact on the environment and we already operate one of the greenest bus fleets in the country.

“Our bio-gas fleet has contributed to much improved air quality in and around Nottingham and this investment in 23 further bio-gas buses will improve it further.”