As a technology partner and sponsor, Varta is supporting the T Sport Bernau team starting this year’s racing season, which has been successful for them in the FIA European Truck Racing Championship for years. Varta says the partnership gives it the opportunity to showcase the high performance of its AGM batteries under the toughest conditions.

T Sport Bernau has been using Varta batteries in its race truck and in the trailer that transports the truck for a long time. Varta claims its AGM batteries meet the highest requirements for cycle stability, vibration and heat resistance – whether on the road or on the racetrack.

“Fleets can rely 100 per cent on our batteries – and it’s the same for truck racing teams,” said Guido Schneider, vice president sales aftermarket at Clarios, the company behind the Varta automotive brand.

Team managers Melanie Derflinger and Tim Frost (pictured below) from T Sport Bernau added: “We are pleased to bring even more technical developments to this year’s race truck, which we hope will make us even more competitive as well as bring new team partners on board who we are excited to be working with.”

The FIA European Truck Championship is on its way to becoming the leading platform for sustainable technologies in road haulage. Since last season, for example, all participants have been driving with fully renewable fuel.

T Sport Bernau has also taken steps to become even more environmentally friendly. This includes the Varta batteries with their closed recycling loop. Due to their performance, they are the driving force behind many fuel-saving new developments.

The new seasons starts in May and features eight races on tracks such as the Nürburgring or Le Mans. 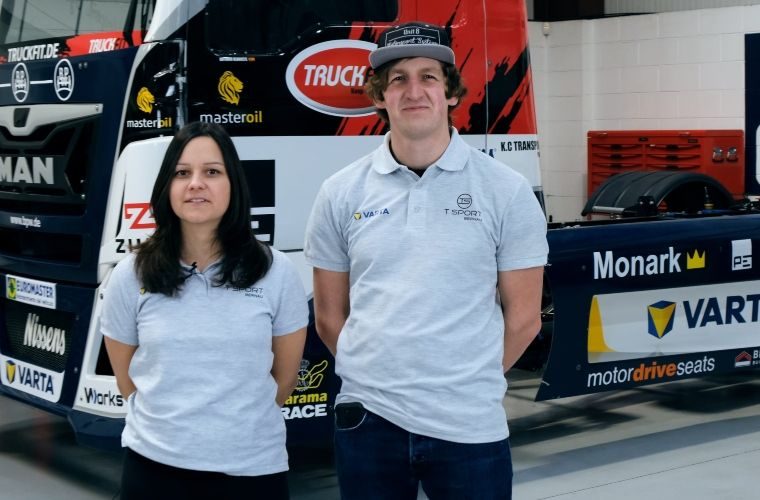