However, it will be the autumn at the earliest before it goes on sale here, with the chip shortages now being added to by long production interruptions for wiring looms due to the war in Ukraine.

First up will be the compact five-seater MPV and the commercial ID Cargo van. These feature a 77kWh battery (gross 82 kWh) and a 150kW (200hp) electric motor. VCV claims that this lithium-ion battery can be boosted on a fast charger from a charge level from five to 80 per cent in a half an hour.

It could be January next before the longer-bodied, seven-seat version will be seen here. It promises to have have a larger 111kW battery and a 170 kW electric motor.

There is also talk of a smaller battery pack will be available for the Cargo, to help increase its payload. How will that impact the range of the commercial version?

Crucially on that point, despite all the hype around this launch, there are no details of the range these vehicles will offer, given in the press information. This is unusual, because in my experience that is the first question asked about every electric vehicle.

The passenger and commercial ID. Buzz versions are based on the same Modular Electric Drive Kit (MEB) as the Volkswagen’s ID.3, ID.4 and new ID.6 passenger cars.

VCV says that the battery is under the floor near the rear axle, and claims that a lightweight electric drive system results in a good distribution of weight and a low vehicle centre of gravity. It adds that both these factors optimise the handling and agility. 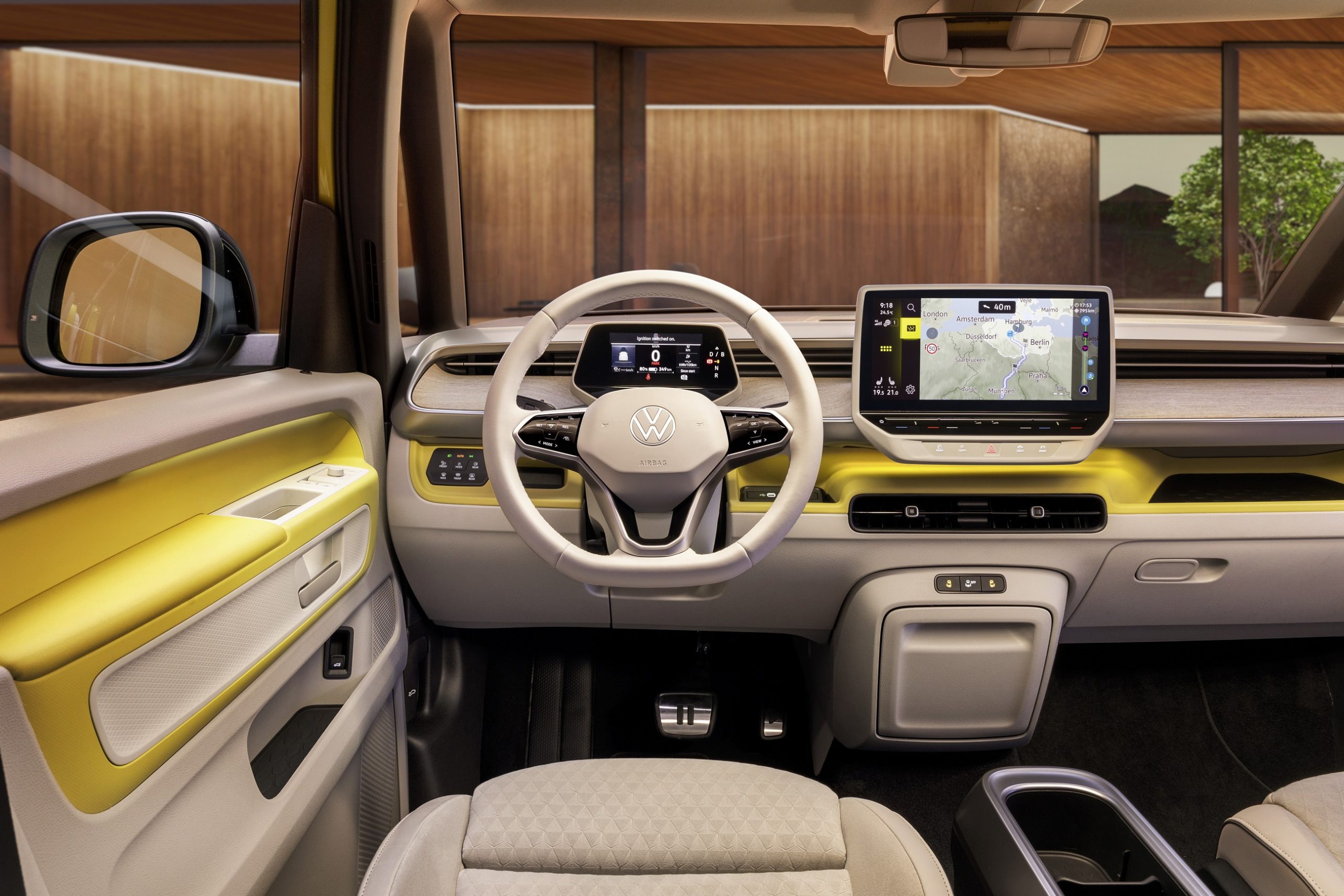 VCV says that the MPV version has ample room for five people and for their luggage (1,121 litres of capacity). If the second row of seats is folded down, the load capacity increases to up to 2,205 litres. There is an option of two or three seats up front.

ID. Buzz Cargo (Van)
There is a fixed partition separating off the 3.9 m3 cargo space in the ID. Buzz Cargo. The zero-emission cargo version can take two loaded euro pallets, if loaded in diagonally, and it promises to have lashing rails on each interior side of the cargo area. There will be one sliding door standard on the ID. Buzz Cargo, with a second door (as in the passenger version) as an option.

When the long wheelbase versions of the ID. Buzz and ID. Buzz Cargo eventually arrive, they will measure 2,988 mm, roughly the same as that of the current Transporter 6.1. The length of both versions is 4,712 mm.

Convertors note, because of the position of the battery and rear mounted motor, it may not be possible to convert an ID. Buzz Cargo for wheelchair access.

Volkswagen says that it will offer an eight-year guarantee of the battery or 160,000km. The word is that the van version will retail for about €50,000 including VAT, and it will also qualify for the SEAI electric van grant of €3,800 if purchased commercially.