The company says fitment of this product doesn’t require a skilled electrician as the units are designed to be simple to fit and are fully function tested to give operators peace of mind. 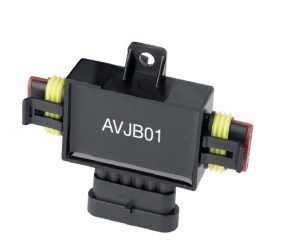 Amber Valley offers two versions of its trailer junction boxes: the AVJB01 and the AVJB02.

The former is a simple version where the seven-core cable is connected to the main plug, the blue lead is not used and a six-way super seal is fitted. The two output circuits are four-way super seal to go to the stop tail and indicator circuits on each side of the trailer. Amber Valley says AVJB01 can be provided as a complete kit if necessary.

The AVJB02 is the complete system. It has an additional input circuit that can come directly from a switch on the towing vehicle. There are two sets of four-way connectors one can be used for front lights/indicators if fitted or both can be used if two sets of lights are fitted to a trailer.

Amber Valley says its trailer junction boxes feature four × two-way female super seal connectors, two of which are powered from the tail circuit in the four-way connector allowing the connection of marker lights.

The other two are powered directly from the two-way male super seal connector. This is powered via the blue wire in the seven-core cable (PIN 2) and is usually used for accessories that can be switched on by the towing vehicle, i.e. work lamps or warning beacons, when powered it sends power to both female connectors.

The company adds that this is also available as a complete system.