Almost a third (32pc) of motorists would take a scrap price offer for their small van or car rather than legally ending responsibility for it.

A recent Red C poll conducted for ELVES, the compliance scheme for End-of-Life Vehicles in Ireland, found that taking the highest price offered when scrapping a vehicle is still a motivator for a significant minority of drivers.

The poll says that 56 per cent of motorists surveyed would prefer to correctly scrap for their vehicle, while 12 per cent were undecided.

Taking the price offered can be tempting as many people do not realise that correctly ending responsibility for their car or small van is a legal requirement.

When a vehicle is scrapped through an Authorised Treatment Facility, the owner receives a Certificate of Destruction (CoD), which means that the owner has officially relinquished responsibility for the car.

If scrapped at an illegal site, the vehicle owner is still responsible if it subsequently turns up somewhere that it should not.

Importantly, having a valid CoD also allows the driver to apply for any motor tax refund that they may be entitled to. 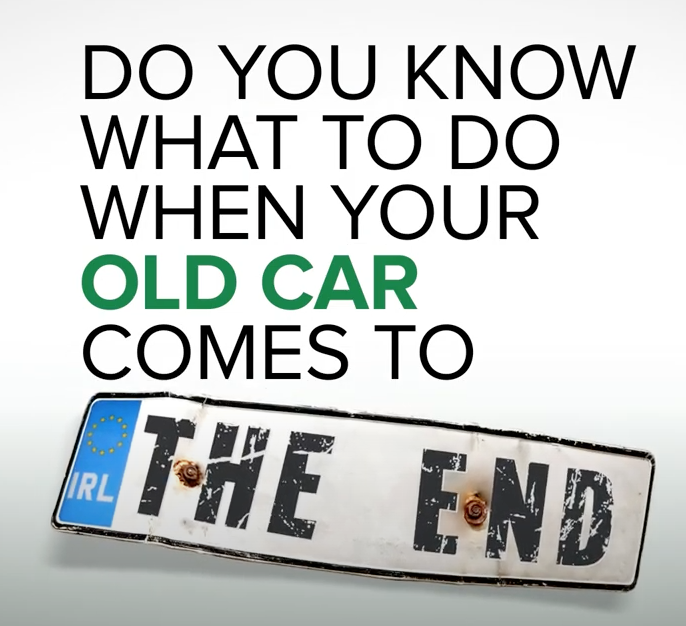 To scrap a vehicle responsibly, a motorists must take their old car or small van to an Authorised Treatment Facility (ATF), which is also known as a permitted scrapyard.

ATFs are facilities with a waste permit issued by their local authority that allows them to accept cars for recycling. There is a list of these sites on www.elves.ie.

As long as a car is complete and contains no rubbish, depositing it at an ATF for recycling is free of charge. If the car is not driveable then many ATFs offer to collect, although fees may apply for this service. All usable materials in the car will either be reused or recycled.

Elena Wrelton, environmental compliance manager at ELVES said the number of people that recognise the importance of correctly scrapping their vehicle is “a huge step forward”.

“This is a key message for us, as getting a Certificate of Destruction also means that the car has been deposited at an Authorised Treatment Facility for recycling: the only place that can issue CoDs,” she said.

“Ensuring products are reused or properly recycled at the end of their lives underpins our transition to a circular economy and supports action on climate change.

“As recycling facilities have improved, reusing and recycling has become more accessible for people and the public has become more willing to adopt a ‘waste not, want not’ attitude for the environment and the planet,” Wrelton added.