What is important in headlamp development – minimising installation space, increasing efficiency, design freedom and the degree of individualisation – also applies to rear lighting; according to automotive lighting and electronic specialist Hella.

For some time, rear lighting has not only fulfilled important safety functions, but also offered a wide range of possibilities for creating individual lighting signatures.

Dynamic direction indicators for example, are already integrated as an attractive functional feature in the compact class.

Dr. Frank Huber, MD responsible for the lighting division at Hella says: “Our lighting developers have long been thinking far beyond just this and in order to be able to display more complex animations, graphics and later also fonts for communication between the vehicle and the environment, it is necessary to further increase the segmentation of the rear combination lamps.

“Our Digital FlatLight technology takes signal lighting to a new level and by integrating a SmartGlass display, our FlatLight now becomes digital. Appropriately equipped rear combination lamps can be controlled with fine granularity, which allows for a variety of customisable signatures and significantly expands the feature set.” 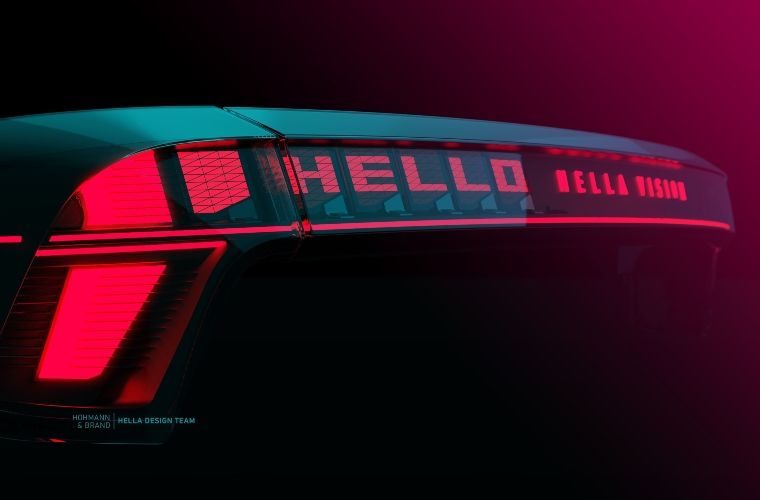 At the beginning of 2021, with the ‘FlatLight | µMX technology’, Hella presented what it calls an innovative light guide concept using micro-optics.

It enables particularly homogeneously illuminated surfaces with an extremely low module depth of only five millimetres. At the same time, the technology combines high efficiency with a wide range of design options, as the front surface of the module can be masked with different decors, Hella claims.

“Digital FlatLight uses exactly this technology, but by using a SmartGlass display, the functionality is increased many times over,” Dr. Huber adds.

In the Hella Vision Digital FlatLight prototype presented for the first time this year, the SmartGlass in front is divided into 44 triangular segments that can be individually switched and dimmed by software.

In contrast to a classic display, not only the size and number, but also the shape of the individual segments can be individually designed.

This eliminates the need for masks and decors, and in the case of a series application, vehicle manufacturers are instead given the option of creating different designs, e.g., for each equipment variant, using the Hella Gain software.

The Digital FlatLight is based on the FlatLight | µMX optical system. On this basis, Hella says it is possible to equip simpler equipment variants with FlatLight and to expand the functionality of the better equipped variants by adding a SmartGlass display, for example.

With the Digital FlatLight, new signatures can be easily programmed for a possible facelift. In this context, new business models such as the installation and adaptation of graphics via app or software update, are also conceivable, according to Hella.

Another plus point is revealed when switched off, as the Digital FlatLight impresses with its “Black Panel” look, a homogeneous glossy black surface. Alternatively, the SmartGlass can be used to make the selected signature visible, even when it is not illuminated.

“Our Digital FlatLight technology is a big step towards the future as it already allows the display fonts and symbols. In addition, light signatures that adapt to the driving modes, text or symbols that warn road users of traffic jams or icy roads, or graphics that display the battery charge level of the electric vehicle, can also be realised with this technology,” says Dr. Huber.

To further increase the resolution of the rear combination lamp and thus the range of functions, Hella says it is working to expand the number of pixels. This is possible by integrating Active Matrix Displays, for example, which means that the vision of a communicating vehicle is becoming more and more of a reality.