Amber Valley says its Indicator Alarmalight is the ultimate audible and visual warning system for trucks.

The device is triggered by an indicator to warn pedestrians or cyclists of the potential blind spot hazards posed when heavy goods vehicles are turning.

The Alarmalight automatically switches off when the hazard lights are in operation to avoid confusion and is significantly quieter at night to avoid noise pollution, according to Amber Valley. 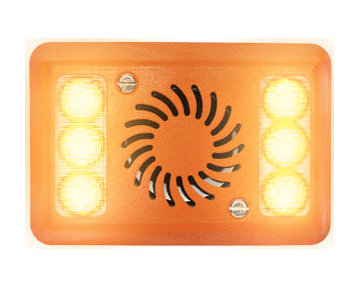 A spokesperson for Amber Valley said: “The increase in cycling, especially in our cities and towns and the problems of blind spot hazards with heavy vehicles turning, has resulted in the number of deaths increasing significantly.

“There have been many attempts at solutions, nearly all of which alert the driver, not the cyclist or pedestrian, which seems ludicrous as they are the ones in danger.

“We have designed our talking alarm, which works off the indicator, to say exactly what the danger is to the cyclist or pedestrian.

“However we have also discovered that on building sites, pedestrians wear ear defenders, while cyclists on the road listen to music with earphones, which also reduces their concentration on their surroundings.

“Our patent pending Indicator Alarmalight is designed to address all of these problems.”