Compared to their predecessors, there has been a considerable increase in mileage performance for both new tyre patterns, 15 per cent for the steering axle and 20 per cent for the driving axle, according to Hankook.

Moreover, it says the 10 per cent reduction in rolling resistance for the AH51 and DH51 contributes to a further reduction in fuel consumption when compared to the already well performing 31 series tyres.

When looking at the CPK indicator (cost per kilometre), which is becoming increasingly important for the entire transportation industry, both new SmartFlex treads are able to support economical fleet operations in an increasingly sustainable manner. 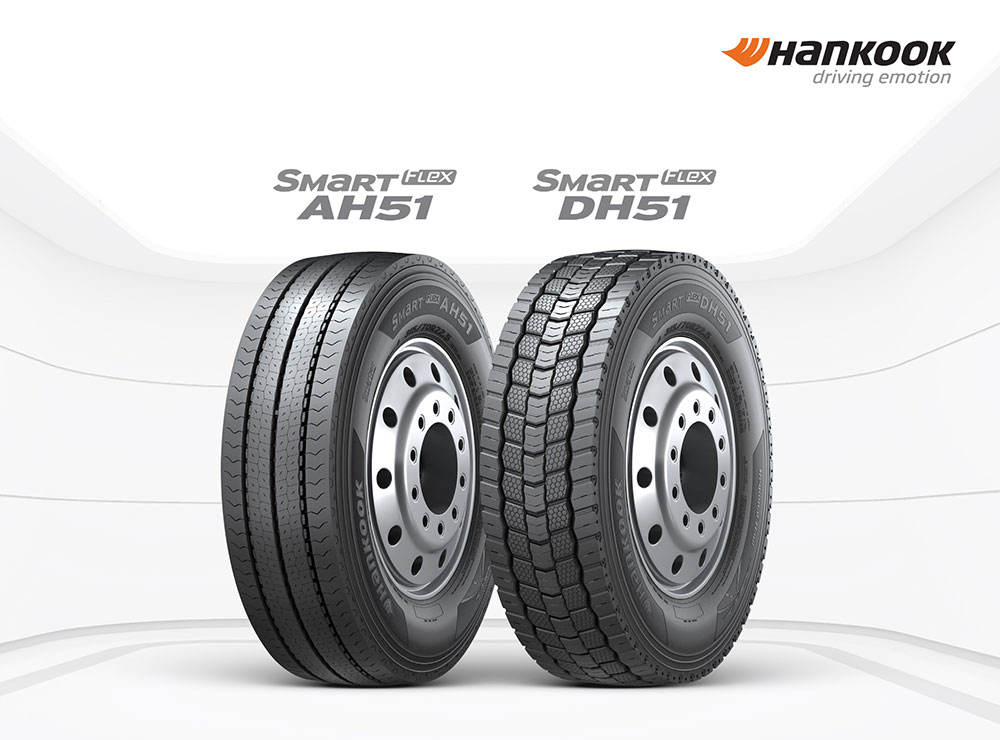 In the development of both tyres, the company’s design engineers used the Hankook SmartLife concept, which particularly focuses on sustainability.

The focus here is on the requirement for the products to always offer the highest possible performance from the first to the last millimetre of tread depth.

Like all modern Hankook truck tyres, the two new treads can be regrooved thanks to the latest technologies and are retreadable. In addition, the Hankook SmartLife Premium casing, in combination with the Hankook Premium retreading, ensures an increase in tyre life of up to 250 per cent and thus an even further increase in resource conservation and cost efficiency, the tyre maker claims.

Guy Heywood, marketing director truck & bus tyres at Hankook Tire Europe said: “Intensive testing has shown that, compared to competitors in the premium category, both new SmartFlex products achieve significantly higher performance standards in the lifetime performance chapter, even when the tyre are 2/3 worn, for example in terms of braking distance on wet roads as well as grip and safety in a wide range of road conditions.”

The base compound of both patterns of AH51 and DH51 was consistently designed for efficiency, Hankook says. The increase in the proportion of low-damping materials contributes significantly to the reduction of principle viscoelastic power loss throughout the tread, therefore less energy is lost, and fuel efficiency is improved. The sidewall compounds were also freshly developed for the new SmartFlex generation.

Hankook says the overall resistance of the SmartLife carcasses used on AH51 and DH51 has been further enhanced compared to the predecessor treads. The new DH51 tyre also has a distinct feature in its notch-tough tread compounds, where special high-performance resins improve the resistance and durability by increasing the molecular weight of the polymers used, thus contributing to an overall higher mileage performance.

The innovative Hankook mixing process IMS (Innovative Mixing System) ensures an even distribution of carbon black particles and rubber molecules within the compounds.

In combination with the extension of the mixing times at lowered temperatures, a significant increase in the bonding rate between the carbon black and rubber molecules can thus be achieved. As a result, SmartFlex tyres generate less heat during operation, Hankook states.