Mercedes-Benz Trucks is pushing resolutely ahead with the development of the battery-electric eEconic for municipal operations in multiple intensive trial series.

The test engineers’ focus is on trials of the vehicle’s safety, performance and durability. The eEconic will also have to prove itself in tests of the batteries and the electric powertrain in summer and in winter.

The vehicle is also being subjected to additional testing concepts such as noise measurements, electromagnetic compatibility (EMC) and test drives on the rough road.

Once the tests have been concluded, the eEconic will head for the next step – customer trials in real-life operation. The start of series production of the eEconic in Mercedes-Benz’ Wörth plant is scheduled for the second half of 2022. 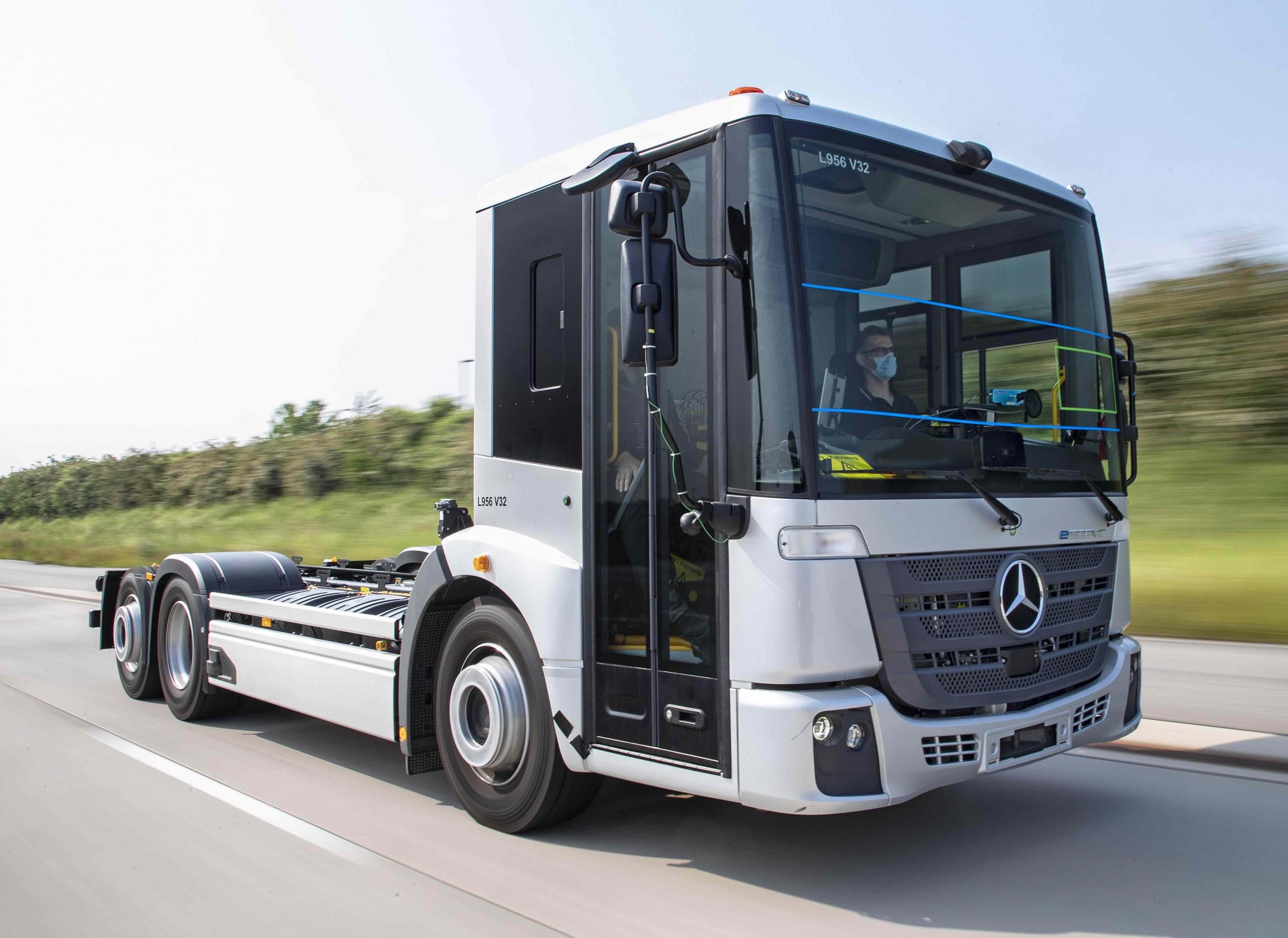 The eEconic’s vehicle architecture benefits from Daimler Trucks’ global platform strategy. The low-floor truck is based on the eActros for heavy-duty distribution operations, which celebrated its digital world premiere at the end of June.

As a result, the central technical specifications of the eEconic are largely identical to those of the eActros.

The eEconic, in its configuration as a refuse collection vehicle, will in future be able to cover the vast majority of the Econic’s typical refuse collection routes without needing to recharge en route, and will be locally CO2-neutral and quiet.

Dr Ralf Forcher, Head of Mercedes Benz Special Trucks, says: “We are subjecting the eEconic to an extremely wide range of test series, and the results to date have shown that we are on the right track with our concept.

“The eEconic is ideally suited for its designated role as a refuse collection vehicle. The high proportion of stop-and-go driving, reliably plannable daily routes averaging 100 km and the charging of the batteries at the customers’ depots add up to an ideal application for the mission profile of the battery-electric low-floor truck.”

Same architecture, different mission profile – the eEconic on the basis of the eActros
The eEconic with a gross vehicle weight rating of 27 tons will initially be launched on the market in its configuration as a refuse collection vehicle with the wheel configuration 6×2/ NLA.

As is the case with the eActros, the technological heart of the eEconic is the drive unit – an electric axle with two integrated electric motors and a two-speed transmission.

The battery of the eEconic series-production model will be equipped with three battery packs, each with an energy capacity of around 105 kWh. This corresponds roughly to the energy content of a new battery pack, including safety and performance limits to maintain system operation.

Both liquid-cooled motors generate a continuous output of 330 kW as well as a top performance of 400 kW. In addition, when driving with foresight, electrical energy can be recovered through recuperation – a major advantage, especially in the stop-and-go operation of refuse collection.

At the end of the daily routes, the batteries of the electric truck can be recharged with up to 160 kW at the customers’ depot.

Developed for municipal operations: safe, efficient, ergonomic and environmentally friendly
The proven features of the conventional Econic that are especially treasured by customers are also part of the eEconic. For example, the deep panoramic windscreen of the “DirectVision cab” with its low seat position provides the driver with direct visual contact with other road users and enables an extremely good overview of the road traffic.

In addition, the low entry and exit of the spacious cab, which offers space for up to four people, provides an ergonomic advantage. In urban operation in particular, the eEconic scores not only with its locally CO2-neutral drive system but also with its lower noise emissions – especially in the early morning.

A holistic ecosystem with consulting available
In order to assist transport companies along every step of their way into eMobility, Mercedes-Benz Trucks – as is already the case with the eActros – embeds the eEconic in an eco-system which also provides advice and services, as well as a range of digital solutions to increase capacity utilisation of the vehicle and to optimise the total cost of ownership.

For example, using a customer’s existing route plans, it is possible to establish a highly realistic and meaningful usage profile for electric trucks.

This so-called eConsulting doesn’t just include electrification of the depot, but if the customer desires, also covers questions concerning planning, applying for and implementing everything to do with the charging infrastructure and connection to the electricity network.

Electrifying the product range with battery and fuel cell drive systems
Daimler Truck AG has set itself the goal of offering only new vehicles that are CO2-neutral in driving operation (“tank-to-wheel”) in Europe, Japan and North America by 2039.

Daimler Truck AG plans to have a vehicle portfolio comprising series-produced vehicles with battery-powered drive systems in the main sales regions Europe, the United States and Japan by 2022.

Beginning in 2027, the company wants to supplement its vehicle portfolio by adding series-produced hydrogen-powered fuel cell vehicles. The ultimate goal is to achieve CO2-neutral transport on the road by 2050.