DB Schenker has added its first UK-based all-electric Fuso eCanter, which will operate out of Bradford. It is one of 36 eCanters being delivered to DB Schenker distribution centres across Europe.

The company’s Bradford operation runs a fleet of 36 vehicles, ranging from 3.5-tonne vans to 44-tonne artic units. The majority are by Mercedes-Benz – of the five that are not, four are due to be replaced shortly with new-generation Actros 2545 tractor units. 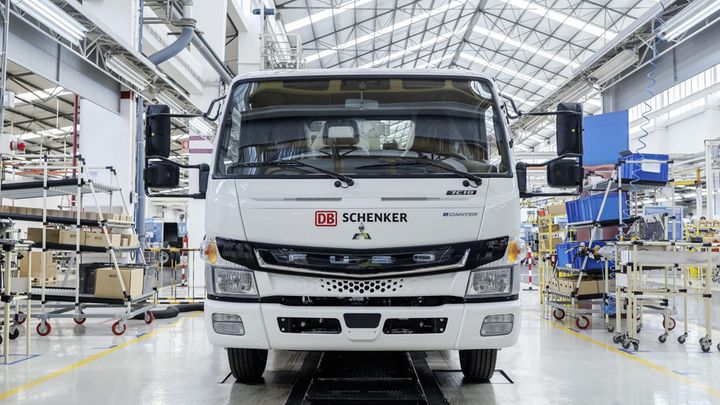 The new 7.5-tonner will work in and around Bradford city centre. Its curtainside body is by En-Veco, the specialist electric vehicle arm of West Midlands-based bodybuilder Bevan Group, which also fitted its 1,000kg Dhollandia tail-lift.

The truck leaves DB Schenker’s depot each morning with its batteries fully charged, and will typically cover up to 90km while making as many as 10 deliveries and a similar number of collections during each round. The eCanter returns to base at the end of the day, its laden weight only rarely having dropped below 6.0 tonnes, and is then recharged overnight.

The eCanter is the world’s first fully electric light-duty truck to enter series production and represents a major advance in the battle to improve air quality in towns and cities. Its electric drivetrain features six 13.8 kWh lithium-ion batteries, giving a total power output of 82.8 kWh (66 kWh usable). The permanent-magnet motor delivers 129 kW (180 hp) via a single-gear transmission in the rear axle.

A single charge gives the battery-powered Fuso an effective operating range of more than 100 km, according to the manufacturer.