UK-based TrailerLock has introduced a new universal key for its Fridge trailer door lock, which means that any driver can access any trailer using their own key. 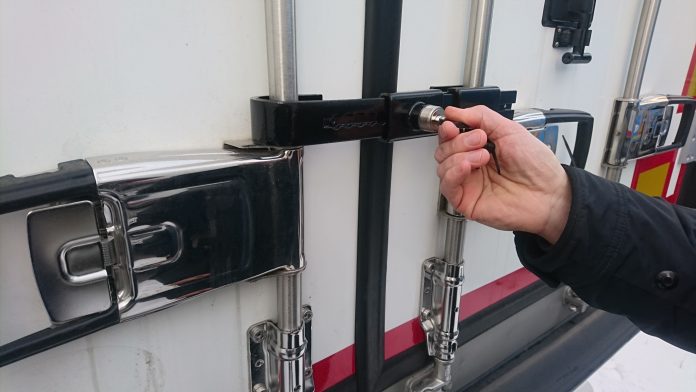 Manufactured from solid steel, simple to operate and resistant to bolt-croppers and crowbars, FridgeLock is extendable and fits most types of surface-mounted door furniture. A barrel lock, protected by a coated steel cap, needs just a half turn to open the two sections of the device, which is then adjusted for length and clamped over each of the vertical door rods.

In addition to protecting the vehicle load itself, FridgeLock protects drivers and continental operators by reducing the possibility of Border Force penalties, which can run into many tens of thousands of pounds.

Simon Clarke of Smith Bowyer Clarke, specialist road transport lawyers, further explains: “We have around 10 new instructions per week where hauliers are seeking to appeal against the imposition of penalties for clandestine entrants running into the tens of thousands of pounds.

“In some cases, having to pay these penalties would mean the company going out of business. We are well used to dealing with penalties in the range of £20,000 to £40,000; we have just closed one case where a haulier had imposed against him a £68,000 penalty, reduced by us on appeal to £20,000.”

According to continental operator Tarrant International, FridgeLock has proved to be effective and simple to use in their temperature-controlled vehicle fleet.

“Quick, strong and uncomplicated,” says director Fergal Tarrant. “We also use other locks but this one does the job.”

Regarding the potential perils of trailer break-ins, Simon Clarke adds :“Drivers may be vigilant in checking their vehicles; however, thousands of illegal immigrants hide inside trucks heading for the UK each year.

“Despite Border Force accepting that a driver and haulier have no idea that the illegal immigrants were inside the truck, penalties will be imposed. One of the best ways to prevent this is by securing the doors of a trailer with a robust lock that cannot be disarmed.”

TrailerLock is the sole UK and Ireland distributor.