The C380 joins two other mixers working with TG Concrete, part of the Tudor Griffiths Group, one of the UK’s leading independent suppliers of construction and building supplies, ready mixed concrete and liquid floor screed. The latest vehicle addition is being deployed to move concrete to builders, construction sites and farms across Mid and West Wales. 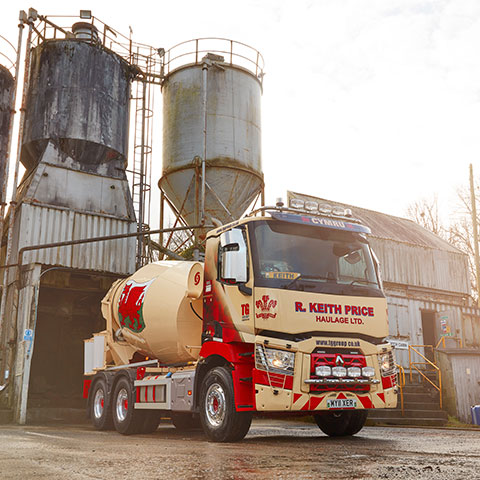 Keith Price has been in the industry for over three decades, originally as a motor mechanic and then following in his father’s footsteps into trucks and concrete. A third generation has also joined the business, Keith Price’s 23-year old son, Rhydian who is now driving the trucks after starting as a batcher and then gaining his HGV licence at the age of 19.

A chance ‘meeting’ through social media platform, Facebook, led to an online conversation with Stephen Whitehead MD of Border Trucks which was located over 200 miles away from Price’s haulage business. He explains: “I’ve had a competitor’s vehicles for over 28 years and their service offering, in particular, was moving further away from my requirements; it was time for a change.

“I’d been following and admiring the vehicles on Border Trucks’ Facebook page and saw other people buying them and I was impressed. I started chatting with Stephen, and he was extremely responsive to queries and ultimately helped to arrange everything, including the finance package. From the first enquiry through to the delivery of the vehicle, Border Trucks made the process flawless.”

Price also upgraded to a five-year, 50,000 km per annum repair and maintenance contract for extra peace of mind.

As an owner driver, Keith Price is the one behind the wheel of the Renault Trucks C on a daily basis, “I’ve been out on the road putting it through its paces and I really can’t fault it at all; from the comfort to performance and durability, I like everything about it. The truck has been in for routine inspections with the team at Perry’s and I’m very happy with their level of service too.”

“After running with a competitor manufacturer’s vehicles for the best part of thirty years, it was definitely time for a change. Our relationship with Border Trucks really has been pivotal in us taking on Renault Trucks as a new manufacturer and so far I’ve been delighted, so much so that I’m looking to replace another on my fleet in the near future,” concludes Price.