Van, Truck, Trailer, Bus and Coach Aftermarket News in Ireland
Menu
HomeMost ReadFord moving to be all-electric in next 9 years

Ford says that it is moving to be all-electric in Europe by 2030. The brand says by mid-2026, 100 per cent of its passenger vehicle and commercial ranges in Europe will be zero-emissions capable, all-electric or plug-in hybrid, with all models being all-electric by the end of this decade. 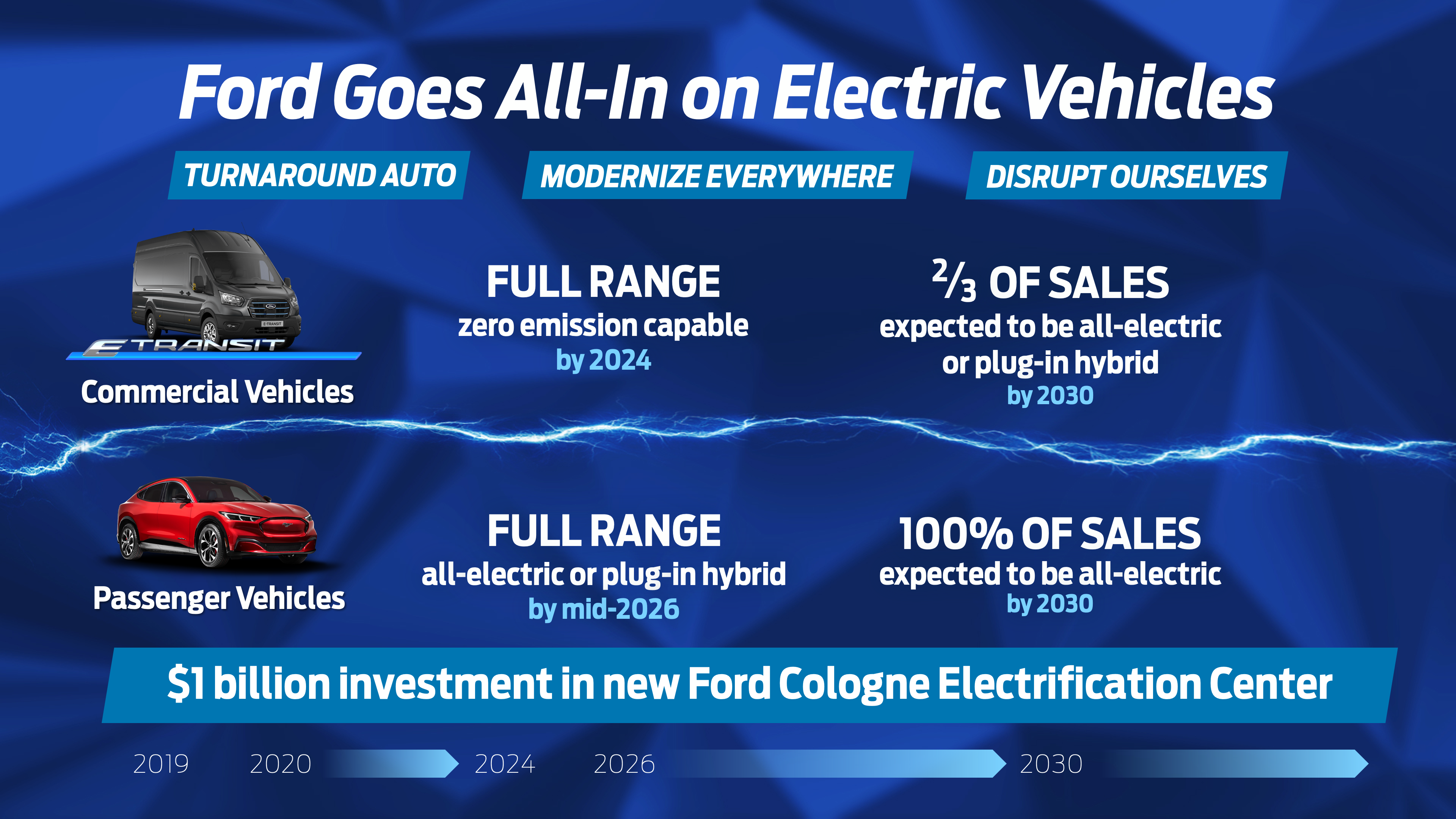 The news comes after Ford reported, in the fourth quarter of 2020, a return to profit in Europe and announced it was investing at least $22 billion globally in electrification through 2025, nearly twice the company’s previous EV investment plans.

Spearheading Ford’s advance into an all-electric future is a new $1 billion investment to modernise its vehicle assembly facility in Cologne, Germany, one of its largest manufacturing centres in Europe and the home of Ford of Europe.

Ford says the investment will transform the existing vehicle assembly operations into the Ford Cologne Electrification Centre for the manufacture of electric vehicles, Ford’s first such facility in Europe.

The brand also confirmed that its first European-built, volume all-electric passenger vehicle for European customers will be produced at the facility from 2023, with the potential for a second all-electric vehicle built there under consideration.

Stuart Rowley, president, Ford of Europe said: “We will offer an exceptional range of electrified vehicles, supported by customer-centric digital services and experiences, allowing our customers to come with us on the journey to a fully electric future, starting right now with the launch of the all-electric Mustang Mach-E. In combination with our leading commercial vehicle business, this will form the basis of a sustainably profitable Ford business in Europe.”

In 2020, Ford achieved its sixth successive year as the leading commercial vehicle sales brand in Europe. Ford says growth in its commercial vehicle business is key to its European profitability, supported by new products and services, working with an extensive network of commercial vehicle converter partners, with Ford’s strategic alliance with Volkswagen and its Ford Otosan joint venture providing cost-effective vehicle development and sourcing.

Driving further growth in the commercial vehicle business will be an ecosystem built around connected services co-developed with customers and designed to enhance the customer experience and help their businesses to thrive. These include, for example, connected uptime and productivity services such as FordPass Pro for fleets of up to five vehicles, and the launch of Ford Fleet Management, created by Ford and ALD Automotive last year to maximise productivity for fleet customers seeking bespoke services to keep their fleets on the road.

Ford and Google also announced recently the establishment of a new collaborative group, Team Upshift, to drive disruptive, data-driven opportunities. This first-of-its-kind partnership in combination with Ford’s in-house capabilities will be the basis of transformed ownership experiences and services for both the company’s commercial and passenger vehicle customers.