A new study by the European Automobile Manufacturers’ Association (ACEA) shows that there are currently 6.2 million medium and heavy commercial vehicles on the EU’s roads, the average age of which is 13 years.

Almost 98 per cent of all these trucks run on diesel according to the 2021 ‘Vehicles in Use’ report, published recently. Just some 2,300 – or 0.04 per cent of the total fleet – are zero-emission trucks. 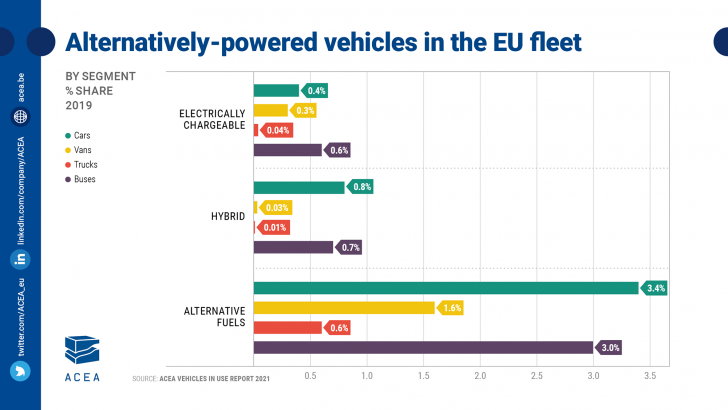 European truck makers estimate that around 200,000 zero-emission trucks will have to be in operation by 2030 in order to meet the CO2 targets for heavy-duty trucks. Based on ACEA’s new data, this would require a staggering 100-fold increase in the space of under 10 years.

In its recently-published Mobility Strategy however, the European Commission laid out the objective to have some 80,000 zero-emission trucks on the road by 2030, which in fact falls far short of what is required by the CO2 regulation (-30% emissions).

“European truck manufacturers are committed to bringing zero-emission trucks to the market, and will be rapidly increasing their range of zero-emission vehicle offerings over the next few years,” said ACEA director general, Eric-Mark Huitema. “However, they cannot make such a radical and unprecedented shift alone.”

Aged more than 21 years, Greek trucks are the oldest in the EU. The newest trucks can be found in Austria (6.4 years).

More than 28 million vans are in circulation throughout the EU. With 6 million vehicles, France has by far the largest van fleet.

The average age of light commercial vehicles in the EU is 11.6 years. Among the EU’s four major markets, Spain has the oldest van fleet (13.0 years), followed closely by Italy (12.6 years).

Diesel-powered light commercial vehicles are dominant in all EU countries except for Greece. Almost 90 per cent of the EU van fleet runs on diesel, just 0.3 per cent of vans in the EU are battery electric, according to the report.

Around 692,207 buses are in operation throughout the European Union, almost half of which can be found in three countries alone: Poland, Italy and France.

Diesel buses still account for 94.5 per cent the EU fleet, with only 0.6 per cent being battery electric.