Toyota has announced that its all-new Hilux is available to order now, with prices starting from €24,258 before VAT. 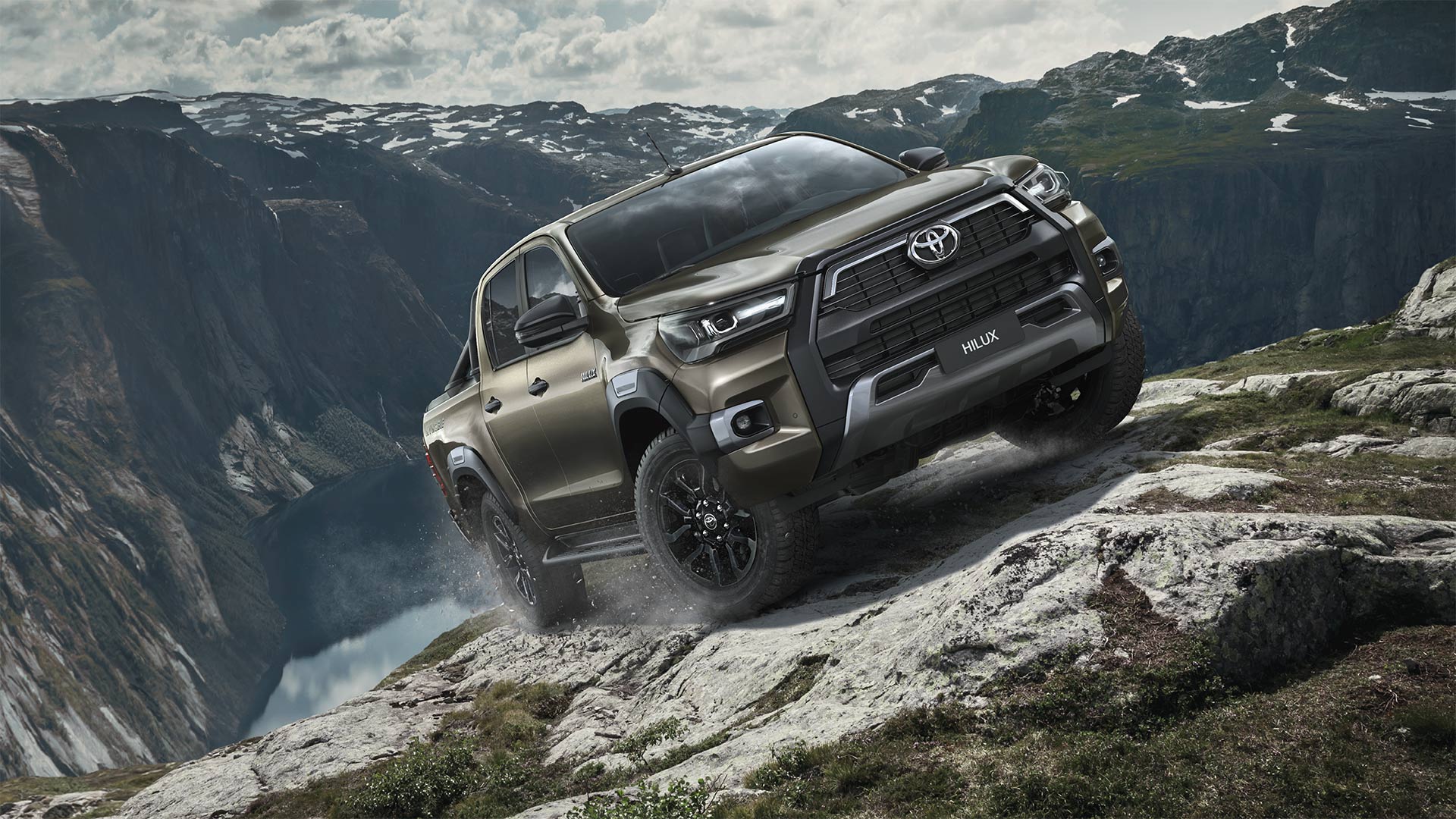 Test drives of the new Toyota Hilux will commence from January 2021, with deliveries to follow shortly after.

Originally launched in 1968, the Hilux has conquered the North Pole, Icelandic volcanoes, the Antarctic and a win in the Dakar Rally in 2019.

Now, the Hilux’s one tonne payload and 3.5 tonne towing capability has now been expanded to all 4-wheel drive body types (Single Cab and Double Cab).

Toyota says the new ‘Invincible’ grade offers Hilux customers bespoke styling and premium levels of equipment, without sacrificing any of its toughness, robustness and reliability.

Numerous features of the vehicle have been optimised to maximise both power output and efficiency. Meanwhile, the shape of the EGR section of the intake manifold and the catalytic converter insulator have both been optimised, improving the quietness of the engine.

Toyota tells us that the all-new Hilux comes with improved suspension and power steering systems. The suspension, which benefits from front and rear shock absorber tuning, offers both enhanced ride comfort and superior steering response.

The tough, durable leaf spring and twin shock absorber rear suspension system has been revised to combine the off-road articulation capabilities expected of a rugged 4-wheel drive workhorse with SUV-like ride comfort and handling stability, according to Toyota.

The 4×4 Hilux’s already peerless off-road credentials have been further enhanced by the addition of a new electronic function (that can be activated in 2WD mode).

This replicates the effect of a mechanical limited-slip differential for improved traction on low grip surfaces in 2-wheel drive mode (available on 4WD models only); the lowering of engine speed at idle from 850 to 680 rpm and a tuned accelerator response for greater driver control; an updated VSC system; dedicated Variable Flow Control (VFC) map for appropriate steering effort, and a new tyre angle monitor.

Further reinforcing its go-anywhere credentials, the Hilux boasts minimum running ground clearance of 310 mm on Double-cabs, all-important approach and departure angles of 29 and 26 degrees respectively, and the ability to wade to a depth of 700 mm.

For even more attitude, the new Hilux showcases a bold new look. The face of the Hilux has been completely redesigned with a new and powerful three-dimensional grille and front bumper treatment. 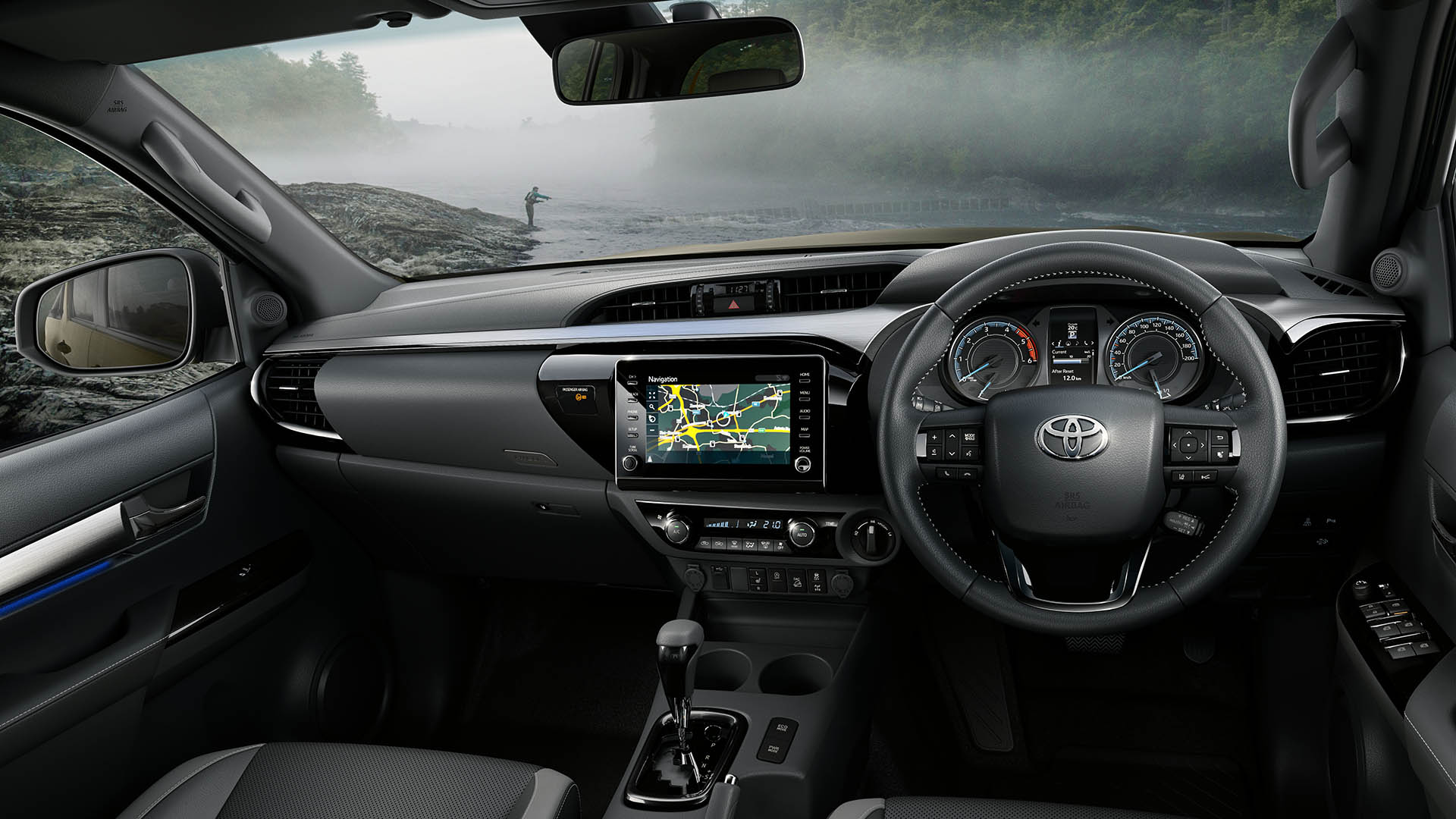 Inside the cabin, Toyota says the durable materials and striking finishes along with a new 8 inch tablet-style touchscreen, standard from SR5 grade, offers a new level of refinement that’s designed to make life easier. The enhanced multimedia system features faster software and screen response, and incorporates both Apple CarPlay and Android Auto for smartphone integration.