Van drivers in Britain would love to see a bridge from Scotland to Northern Ireland, according to some experts. I imagine that everyone would.

Specialist vehicle suppliers LeaseVan.co.uk looked at which potential future engineering innovations would be most welcomed by the UK’s van drivers. We look first at the suggested British transport connections with the island of Ireland.

They said routes better connecting remote parts of the UK with our cities, along with tunnels or bridges connecting Britain to mainland Europe and Ireland would offer more opportunities to UK businesses.

There are currently around two million vans along with half a million HGVs on UK roads with a quarter of a million people identifying ‘van driver’ as their main occupation.

Many of the vans are driven by small business owners and tradespeople such as builders and plumbers with many feeling better connections to other parts of the UK and Europe would afford them further opportunities.

The experts at LeaseVan.co.uk said a road bridge between Scotland and Northern Ireland was something many of their customers would like to see as it would open up the island of Ireland and help businesses in both the UK and Irish Republic.

The UK government was rumoured to be considering a Scotland to Northern Ireland road bridge last year with a feasibility study looking at two routes, Portpatrick to Larne or Kintyre to the Antrim coast, a stretch of around 20 miles across the Irish Sea.

Figures of between £15bn and £20bn has been mentioned for the Scotland to Northern Ireland bridge alone.

Similar super bridges in Scandinavia connect Denmark, Sweden and Norway and have helped to open up the economies there while in Hong Kong the Zhuhai-Macau bridge spans more than 30 miles of sea water.

Other dream routes for van drivers include a tunnel underneath the Irish Sea from Holyhead to Dublin which would reduce journey time from 3hours 15 mins to just over an hour.

Within Britain, Van drivers would also like to see a bridge or tunnel spanning the Bristol Channel from Ilfracombe in north Devon to Swansea in south Wales which would vastly reduce journeys in the south west.

A bridge from Portsmouth to the Isle of Wight was another innovation which the LeaseVan.co.uk team said would make life easier for van drivers. 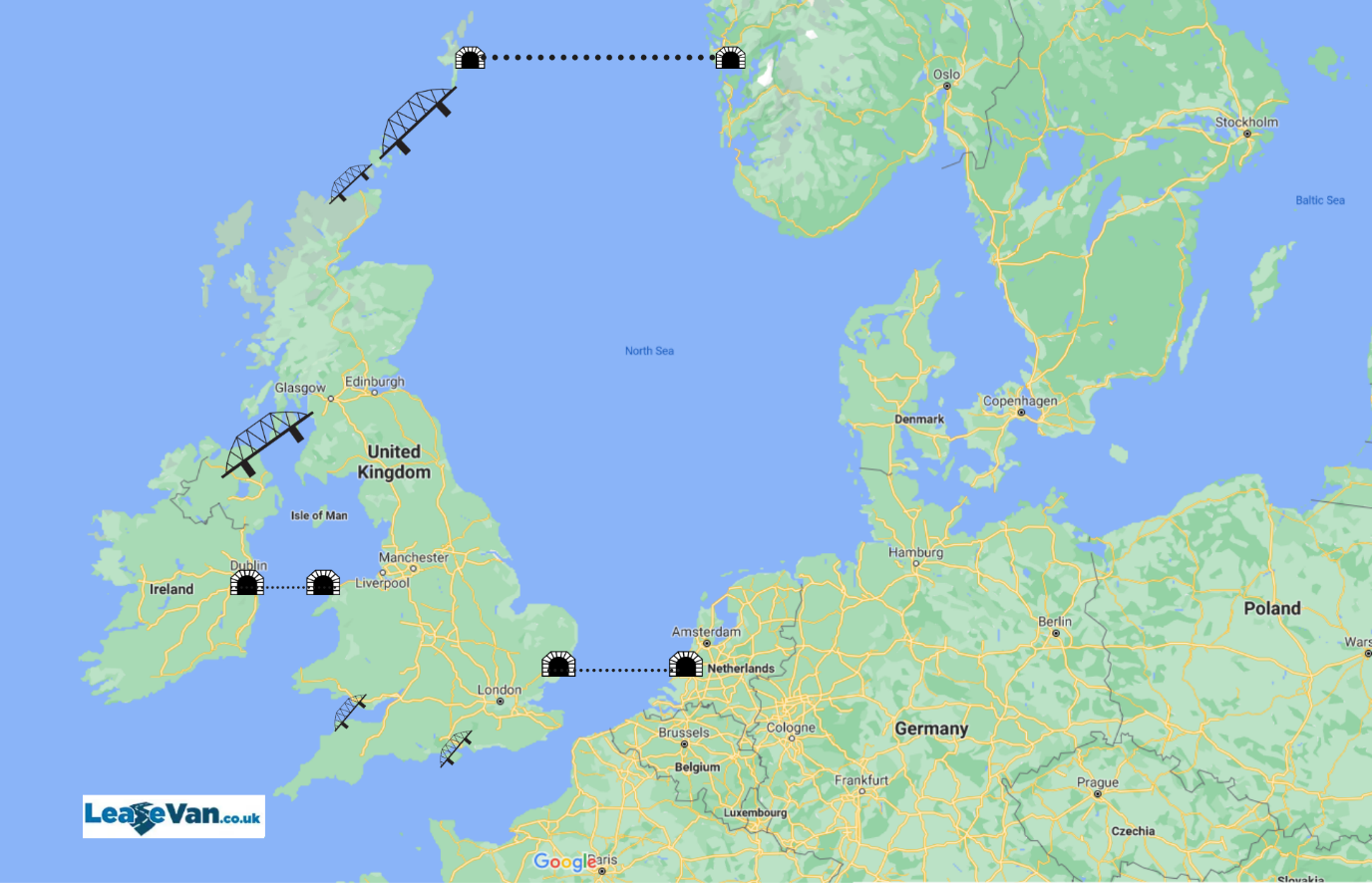 While in the east of England a second Channel tunnel connecting Felixstowe with The Hague would ease transport to mainland Europe.

The experts said a series of bridges and tunnels in Scotland could connect John O’Groats to Orkney and on to the Shetlands, turning the Northern Isles into a north Atlantic Florida Keys style archipelago.

A further tunnel under the North Sea from Shetland to Bergen in Norway would open up Scandinavia and the Arctic Circle to both UK freight and tourism with thousands of Brits flocking to see the Northern Lights.

A spokesman for LeaseVan.co.uk admitted the routes were little more than a wish list at this stage but said all of them would have economic benefits for the UK.

He said: “Van drivers are the unsung heroes of the UK economy keeping the country running even during this global pandemic. These routes represent what we think would make their lives a whole lot easier – and open up major trading and tourism routes for Britons to enjoy.

“Of course none of these innovations would be cheap. We have seen a figure of £20bn discussed for the Scotland to Northern Ireland bridge alone and that is perhaps the most simple of our proposed routes.

“And as well as the required financial investment there are also the environmental concerns which would, of course, have to be seriously considered.

“But if these routes do turn out to be feasible then they would have major economic benefits for the UK.

“They would also make it a doddle for van drivers to pop over to Dublin for a day’s plumbing or even to nip to Norway for a plastering job.

“They would also be good news for tourism, bringing many visitors to the UK as well as making it much easier for us to explore other countries.”