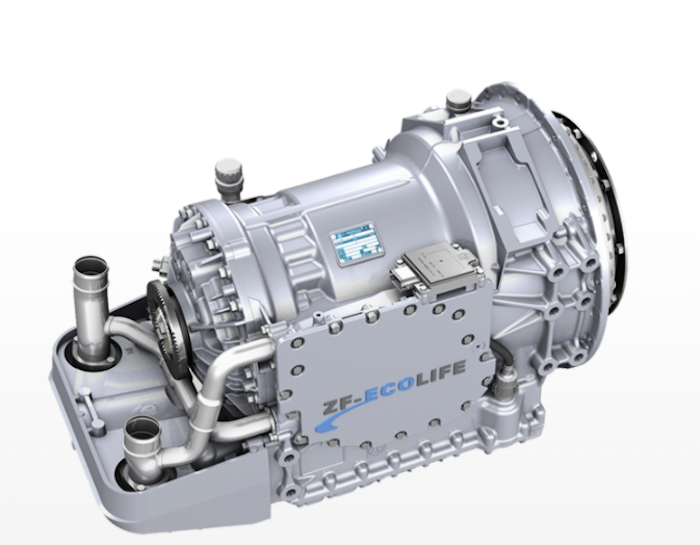 In trials on double-deck, city buses that began the end of 2019, ZF EcoLife 6-speed automatic transmission has achieved real mpg data of over 10.5 mpg thanks to its maturing technologies. As double-deck vehicles are aero-dynamically challenged because of their design, this makes a significant difference to the fuel consumption.

As a standard vehicle of a similar set up offers approximately nine mpg on average, the results show that ZF’s system can offer around a 16 per cent fuel saving.

The fuel trial figures are being measured using ZF’s own cloud-based system of OpenMatics, as well as a separate system used by a customer to monitor their own fuel data, and ZF has found that the systems are accurately comparable.

David Wakeling, head of commercial vehicle, manager ZF Aftermarket said: “This is an incredible achievement for our EcoLife transmission. Fuel that is actually used in operation directly relates to the bottom line of any bus operator and it’s therefore important to measure fuel consumption this way to achieve accurate and realistic results.”

The ZF EcoLife 6-speed automatic transmission’s stop/start function allows for an unlimited number of stops and restarts, even after extended engine standstill, for instance, due to heavy traffic. In designing the second-generation ZF EcoLife transmission, engineers adapted the existing hydraulic system to exploit the pressure stored in the primary retarder oil accumulator.

ZF says that the integrated primary retarder provides a leading wear-free braking performance down to a near standstill. This extends the lifecycle of the vehicle service brakes and protects the environment thanks to a reduction in brake dust.

The noise pollution aspect is well documented by DEKRA as being a key advantage of the EcoLife product, both from pedestrian and passenger perspectives. This is thanks to helical-cut gears and six optimized ratio steps, combined with ZF’s TopoDyn Life transmission control software, reducing engine speeds across the complete driving cycle of the vehicle. This is said to not only lower exhaust emission levels, but also minimise noise across the vehicle speed range.

Designed to cope with an ever-demanding operational environment, ZF EcoLife is suited for application from a midi bus to 26-metric ton double deck in city or intercity operation.