To ensure the planet does not exceed a two-degree temperature increase, as enforced by the Paris Agreement in November 2016, everybody needs to consider their day-to-day actions both at home and in the workplace. Significantly reducing CO2 emissions will be an enormous challenge, especially considering the transport sector produces around 24.5 per cent of global emissions (International Energy Agency 2018).

However, Schaeffler is committed to overcoming this challenge, with its vision of sustainable mobility.

The company has pledged to play an active role in reducing CO2 emissions by 60 per cent by 2050; however, public demand for mobility is on the rise worldwide – therefore, how can Schaeffler help to achieve these targets? Thanks to a mix of highly-efficient drivetrain concepts, combined with system solutions along the entire energy chain, the company is confident the goal is within reach. 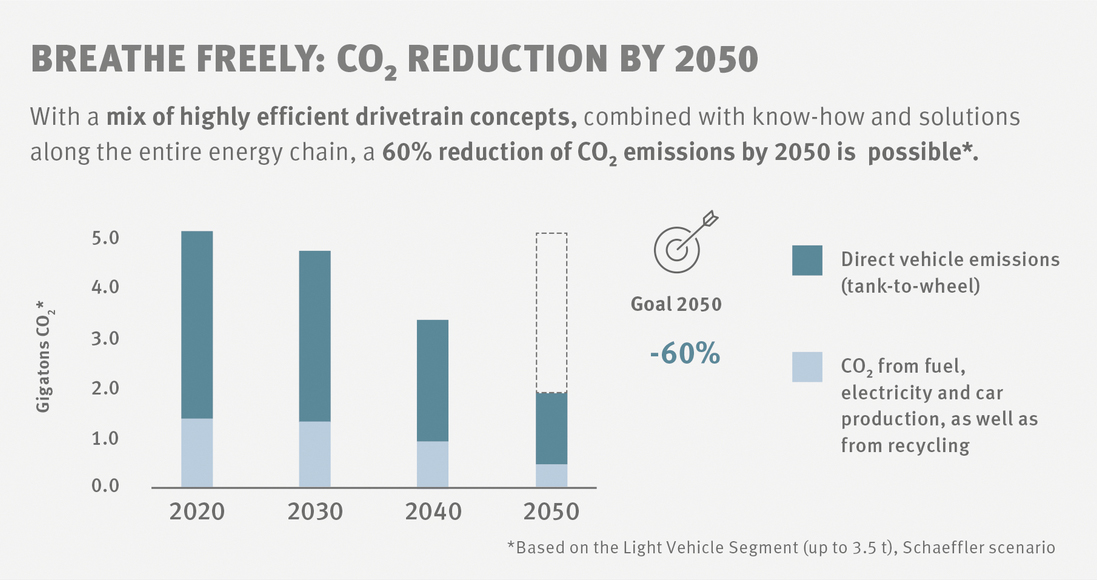 The UK government recently announced a decision to bring forward its ban on new petrol, diesel and hybrid cars from 2040 to 2035 – and Transport Secretary, Grant Shapps, is not ruling out the ban being introduced as early as 2032. The ban is part of the government’s strategy to move drivers over to fully-electric vehicles, thus helping the UK meet a ‘net zero’ emissions target by 2050. This puts renewed pressure on vehicle manufacturer technology partners, like Schaeffler, to provide the components and systems to power the vehicles of tomorrow.

Schaeffler’s own research and analysis shows that by 2030 there is likely to be a 30/40/30 split in the light vehicle segment; where 30 per cent of vehicles will still have just an internal combustion engine (ICE), 40 per cent will have a hybrid powertrain, combining electric motors with an ICE, and the remaining 30 per cent will be purely electrically powered. 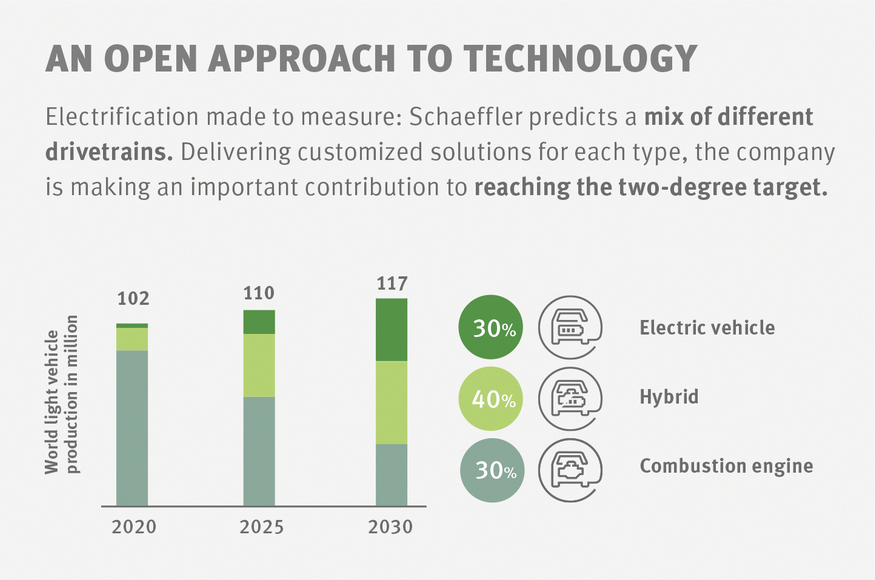 In cities and towns, vehicle emissions are being scrupulously observed and actions are being taken to reduce them; Bristol, for example, is set to become the UK’s first city to ban diesel cars from entering parts of the city in a bid to cut its air pollution and charge owners of commercial vehicles to enter a certain area.

Vehicle manufacturers are obliged to fulfil their mandatory upper limits for emissions in the LCV sectors separately, as it is not possible to offset emission values against those of passenger car fleets. The performance of electric motors can largely fulfil those requirements, which is one reason why Schaeffler has invested in several electric powertrain projects.

In December last year, Schaeffler and Audi announced an agreement to continue their Formula E technology partnership, focusing on transmission, engine and drive concept improvement with a target of both success and ‘sustainable mobility’. At the end of 2019, Schaeffler and ABT, also a partner with the Audi Formula E team, announced that they would collaborate to electrify light commercial vehicles weighing up to 3.5 tons. ABT e-Line is a partner of Volkswagen Commercial Vehicles, and has been tasked with electrifying vehicles, such as the T6 and Caddy, for which it has been agreed that Schaeffler will develop the electric powertrain.

Schaeffler has already laid the foundations for providing sustainable and fit-for-the-future mobility. By already providing advanced parts and systems for vehicles with integrated start-stop technology and 48V e-components, to hybrid vehicles with smaller fossil fuel powered engines and pure electrics, Schaeffler is securing its place as a valuable technical partner.

Of course, all these new components and systems need to be maintained and repaired, and as an original equipment supplier at the forefront of the technological evolution towards electrification, Schaeffler is well-placed to continue providing the products, tools and training that will help garages remain viable in the future.

Another method of reducing CO2 emissions and fuel consumption is by controlling engine heat flow, using a thermal management module (TMM) – coined ‘cooling on demand’. Schaeffler produces TMM units for OE fitment, which are also distributed to the aftermarket under the INA brand.

A TMM uses sensor-controlled rotary vanes to accurately regulate the temperature balance throughout the powertrain, which means that an optimal temperature can be reached quickly in additional controlled circuits, such as the gearbox, engine oil and turbocharger. 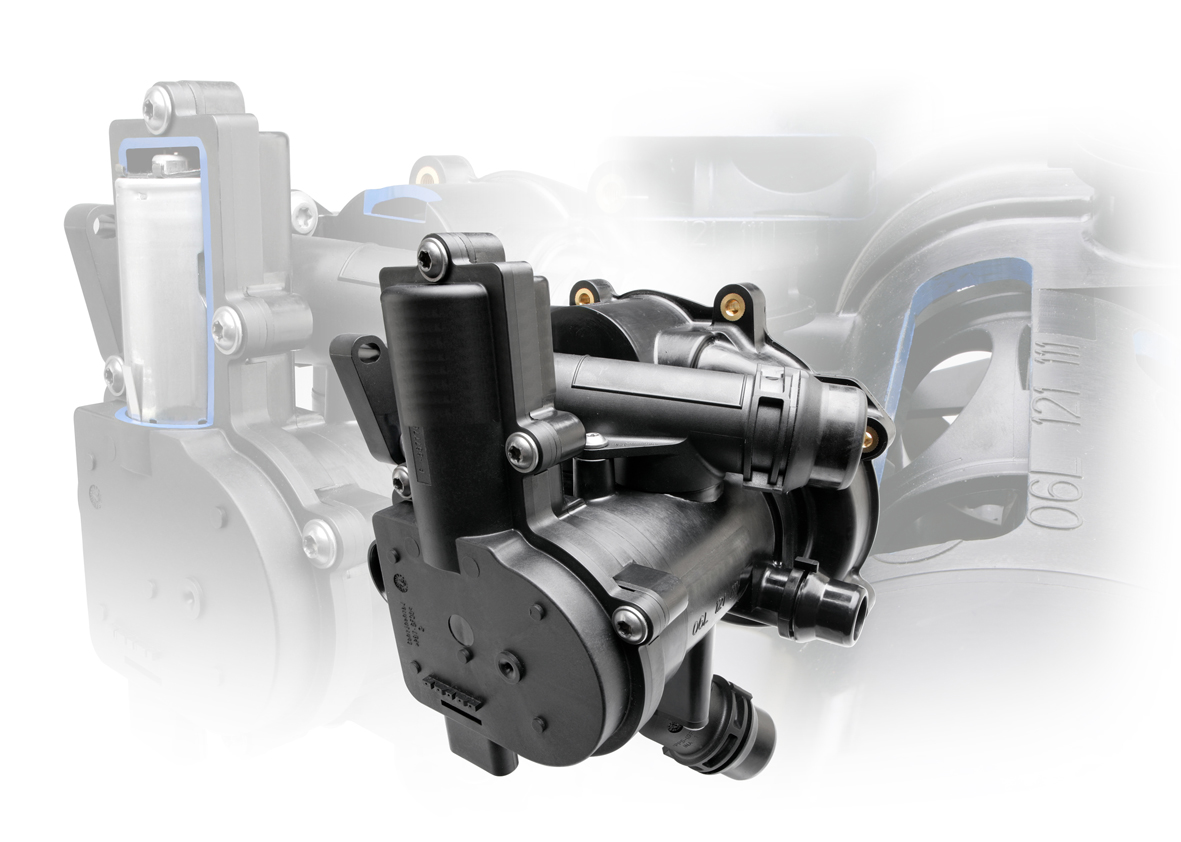 The TMM also controls engine temperature from start-up, resulting in a significantly quicker ‘warm-up’ phase that can result in a CO2 emissions reduction of up to four per cent.

For vehicle manufacturers, a TMM is a ‘bolt-on’ cooling system, and as the INA unit has already been originally fitted to around two million Volkswagen Audi Group vehicles, it appears to be proving a successful and popular innovation.

The INA cooling range also includes mechanical, switchable and electric water pumps, many of which can also be found inside appropriate INA KIT+ boxes, along with all the components needed for a professional belt system service.