Van, Truck, Trailer, Bus and Coach Aftermarket News in Ireland
Menu
HomeNewsVW draws nice picture of new Caddy van-based mini-camper
Volkswagen Commercial Vehicles has revealed the first images and details of the successor to the Caddy Beach. The world premiere of the new compact camper is set to take place virtually at the beginning of September. 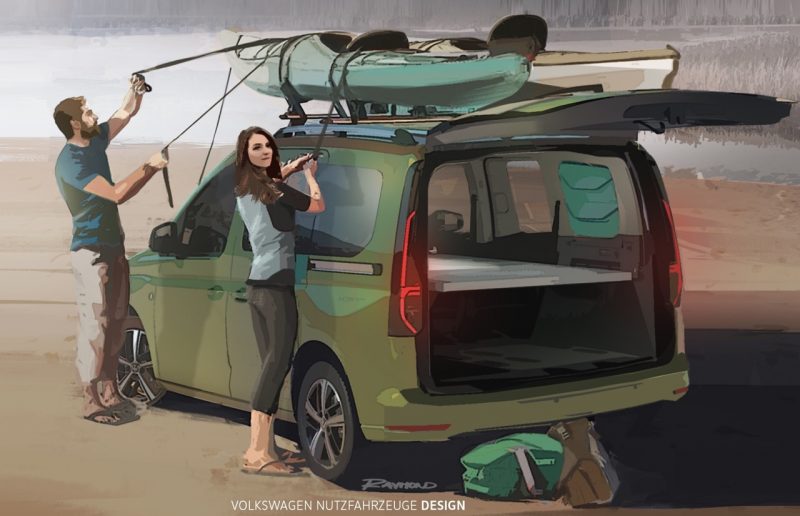 Their new mini-camper is based on the new generation Caddy van and VW says that it boasts a host of new features. One example is the entirely new bed concept that it says has been redeveloped to offer greater versatility. The German manufacturer boasts that technology in the compact camper van is definitely state-of-the-art. A panoramic glass roof is also included.
Since 2005, Volkswagen Commercial Vehicles has been selling a compact mobile home based on the Caddy as a standard production model. From the outset, the aim has been to retain everyday utility and to design the fittings such as storage bags and bed area to be removable. VW says that this is also true of the latest generation. The new model is intended for all who seek maximum flexibility from their car.

Those who prefer to sleep in the dark or wish to avoid being woken by the sun in the morning can of course also darken all of the windows, including the glass roof.VW says that ensuring comfort while sleeping on the almost two-metre-long bed are disc spring elements, as used in the beds of the bigger California.
Volkswagen Commercials say that cleverly stowed in the rear are the popular and lightweight camping chairs and table from the California models. The two practical storage bags can be taken inside the home for easy loading. They also serve as privacy screens inside the vehicle when fastened in the rear window sections. 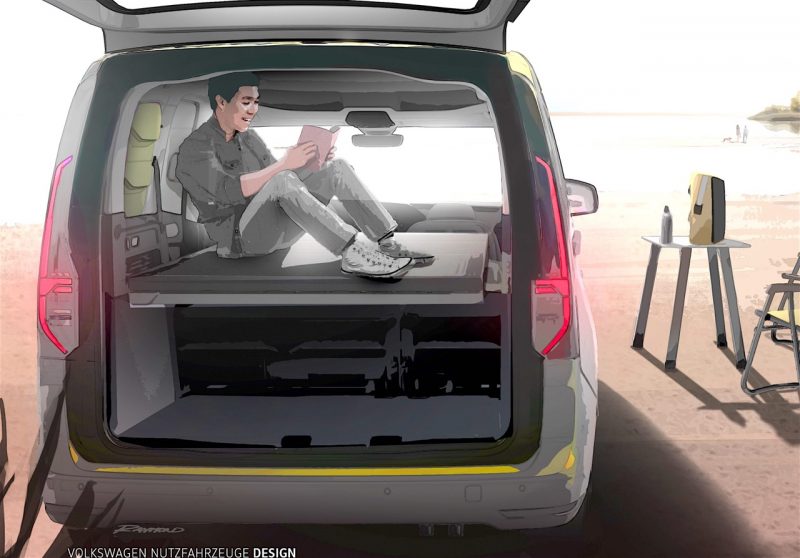 The new Caddy features 19 assistance systems for comfort and safety while travelling. Included among them is ‘Travel Assist’, which for the first time ever enables assisted driving in a Volkswagen commercial vehicle over the entire range of speeds. Also new in the Caddy and familiar from the Crafter and the T series are ‘Trailer Assist’, which makes reverse manoeuvring with a trailer significantly easier.
Like the driver assistance systems, VW boasts that the Caddy’s new four-cylinder engines are also innovative. It adds that they are from the next stage of engine evolution, fulfil the 2021 Euro 6 emissions standards and are all fitted with particulate filters. Also being used for the first time in the TDI units – which have power outputs between 55kW / 75 PS and 90 kW / 122 PS – is the new twin dosing system.
Via two SCR catalytic converters and hence double AdBlue injection, VW claims that the nitrogen oxide (NOx) emission levels are significantly reduced in comparison to the previous model. It goes on to boast that this makes the Caddy’s TDI engines among the cleanest diesel engines in the world. It also says that that the turbocharged petrol engine (TSI) delivering 84 kW / 116 PS is also efficient and sustainable.