A plan to install overhead charging cables for electric trucks on the slow lanes of the UK’s motorways has been published this week. 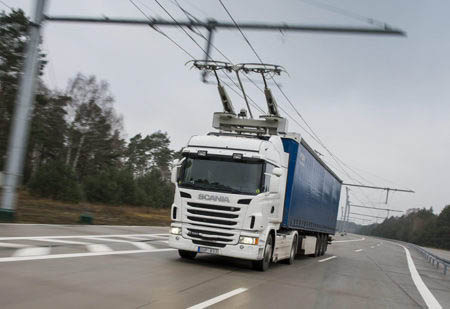 The plan, which is expected to cost around £19.3bn, is part of the government’s aim to achieve zero carbon emissions by 2050. If approved, an £80m pilot programme could be rolled out along 40 miles of the M180 between the A156 and the M18 in South Yorkshire.

The site has been earmarked because of its high levels of HGV traffic from Immingham port and its proximity to several national distribution logistics companies.

It follows a study published by the Centre for Sustainable Road Freight, calling for radical action to cut freight emissions.

Under the proposal, trucks using electric drivetrains could use the inside lanes of motorways, taking power via pantographs from overhead cables similar to the method used on railways or trams.

The electricity would charge the truck’s electric motor and recharge an onboard electric battery that would harness enough power to take the vehicles to their destinations beyond the electrified roads.