The company plans to ship a total of 50 Xcient Fuel Cells to Switzerland this year, with handover to commercial fleet customers starting in September. Hyundai plans to roll out a total of 1,600 Xcient Fuel Cell trucks by 2025, reflecting the company’s environmental commitment and technological prowess as it works toward reducing carbon emissions through zero-emission solutions. 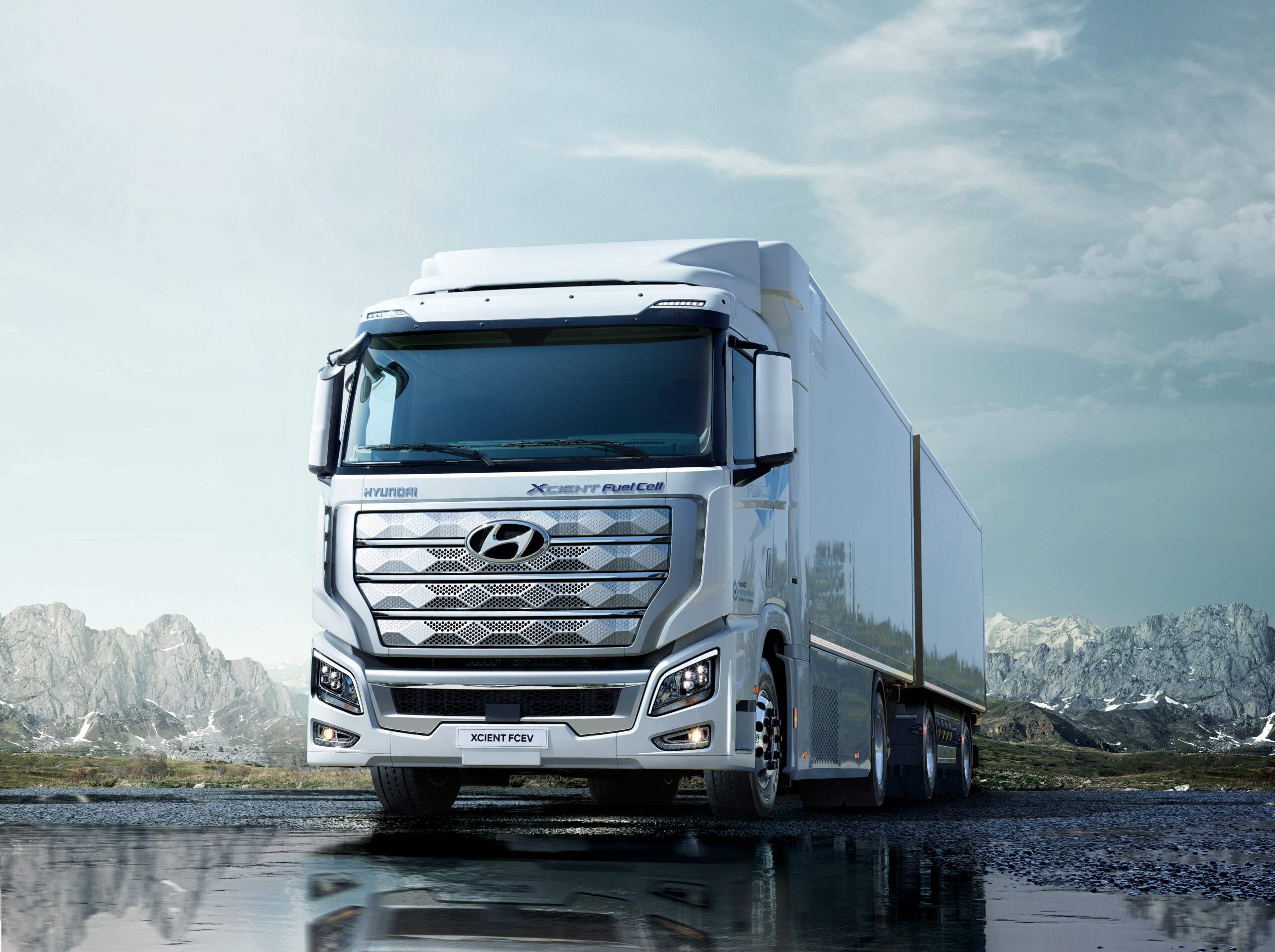 “Xcient Fuel Cell is a present-day reality, not as a mere future drawing board project. By putting this ground-breaking vehicle on the road now, Hyundai marks a significant milestone in the history of commercial vehicles and the development of hydrogen society,” said In Cheol Lee, executive vice president and head of CV division at Hyundai Motor. “Building a comprehensive hydrogen ecosystem, where critical transportation needs are met by vehicles like Xcient Fuel Cell, will lead to a paradigm shift that removes automobile emissions from the environmental equation.”

“Having introduced the world’s first mass-produced fuel-cell electric passenger vehicle, the ix35, and the second-generation fuel cell electric vehicle, the NEXO, Hyundai is now leveraging decades of experience, world-leading fuel-cell technology, and mass-production capability to advance hydrogen in the commercial vehicle sector with the Xcient Fuel Cell,” he added.

Xcient is powered by a 190-kW hydrogen fuel cell system with dual 95-kW fuel cell stacks. Seven large hydrogen tanks offer a combined storage capacity of around 32.09 kg of hydrogen. The driving range for Xcient Fuel Cell is about 400 km on a single refuelling. This was developed to find an optimal balance between the specific requirements from the potential commercial fleet customers and the charging infrastructure in Switzerland. Refuelling time for each truck takes approximately 8-20 minutes. 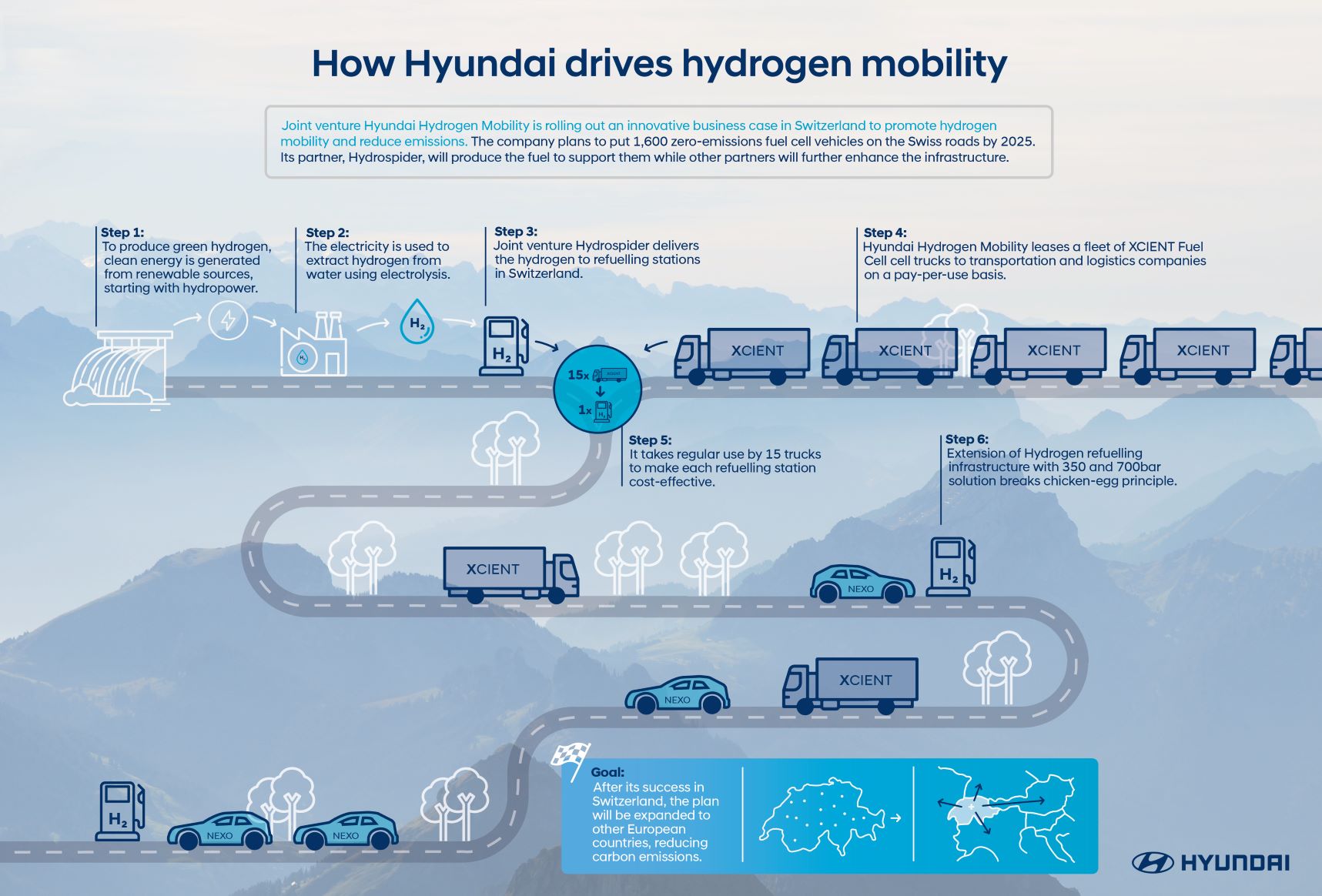 Fuel cell technology is particularly well-suited to commercial shipping and logistics due to long ranges and short refuelling times. The dual-mounted fuel cell system provides enough energy to drive the heavy-duty trucks up and down the mountainous terrain in the region.

In addition to Xcient Fuel Cell, Hyundai Motor is developing a long-distance tractor unit capable of traveling 1,000 kilometres on a single charge. It will be equipped with an enhanced fuel cell system with high durability and power, aimed at global markets including North America and Europe.

In 2019, Hyundai Motor Company formed Hyundai Hydrogen Mobility (HHM), a joint venture with Swiss company H2 Energy, which will lease the trucks to commercial truck operators on a pay-per-use basis, meaning there is no initial investment for the commercial fleet customers.

Hyundai chose Switzerland as the starting point for its business venture for various reasons. One of the reasons is the Swiss LSVA road tax on commercial vehicles, which does not apply for zero-emission trucks. That nearly equalises the hauling costs per kilometre of the fuel cell truck compared to a regular diesel truck.

Hyundai’s business case involves using purely clean hydrogen generated from hydropower. To truly reduce carbon emissions, all of the trucks need to run on only green hydrogen. Switzerland is the country with one of the highest shares of hydropower globally, and can therefore deliver sufficient green energy for the production of hydrogen. Once the project is underway in Switzerland, Hyundai plans to expand it to other European countries as well.