Kearys Renault is this year celebrating its 10th anniversary as the main Renault and Dacia dealer in Cork.

Kearys Motor Group joined the Renault family in 2010 with the Kinsale Road dealership, before launching Dacia and expanding into Midleton with a second dealership in 2012 and opening a standalone Renault Pro+ van centre on Sarsfield Road, Cork, in 2016.

Kearys Renault was named a ‘Dealer of the Year’ in 2016 by Renault during a prestigious awards ceremony in Paris, with more than 2,500 Renault dealers from 35 countries taking part. 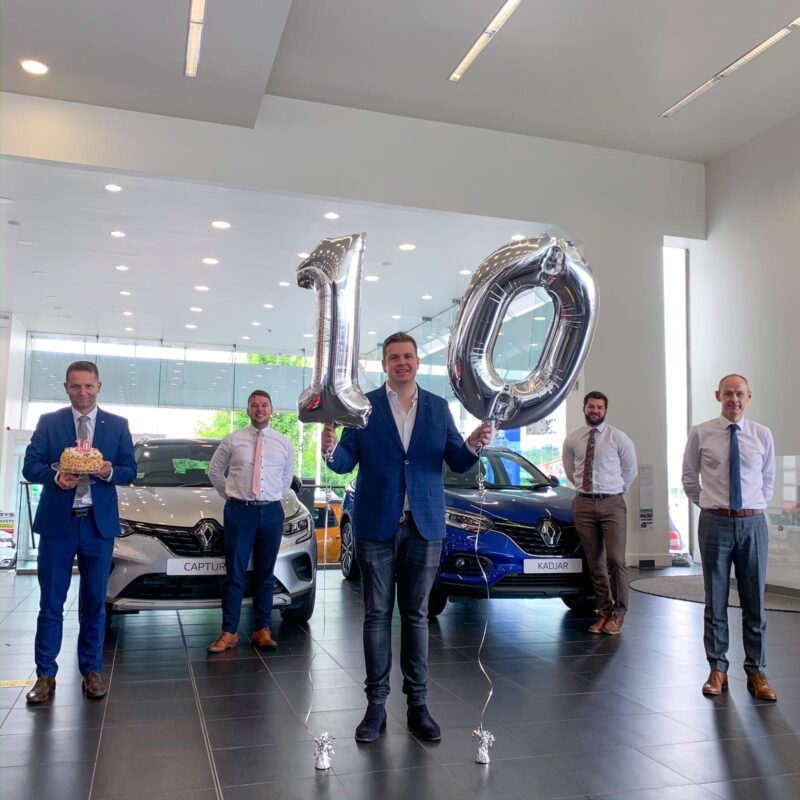 Over the past decade, Kearys Renault has developed a number of key sponsorships in Cork. These include motoring partner of Munster Rugby with many entertaining player videos and customer promotions. More recently, Kearys Renault Pro+ supplied the kit van for the Cork Minor Hurling Team and has sponsored the jerseys for Douglas Camogie and Goleen GAA Clubs, aligning with Renault Ireland’s sponsorship as the official car partner of the GAA.

Also, Kearys Renault has exhibited at The Cork Summer Show, supported the Better Life Cycle, Coachford and Ardfield Festivals, as well as a number of Cork-based charity events.

Earlier this year, Kearys signed a three-year headline sponsorship with Cork Chamber of Commerce promoting its range of electric vehicles and sustainable driving in Cork.

Kearys Renault and Kearys Dacia are running the ‘Buy Now, Pay Later’ offer – with no payments for the first three months, and is available for 202 on Renault, LCV and Dacia.

Brendan Keary, Kearys Motor Group commented: “Since 2010, our fantastic team at Kearys Renault Cork have sold and serviced thousands of cars and vans and has developed a close relationship with many of our loyal customers.

“It is great to hear of many families who return to Kearys for their next car and maybe their son or daughter’s first car. We would like to take this opportunity to thank Renault Ireland and our fantastic customers for their continued support.”

Patrick Magee, country operations director Renault Ireland: “I’d like to extend a huge congratulations from all of us at Renault Ireland to Bill & Brendan along with all the team at Kearys Motor Group on their 10th anniversary as Renault dealers. There have been so many highlights for the partnership over the last decade, one of which is undoubtedly Kearys winning a prestigious Dealer of the Year award.

“The performance of the Renault Group brands in Cork could not have been achieved without the dedication of the whole Kearys team to their customers, and I look forward to the next 10 years. I wish all the team the very best of luck for the future.”