Irish consumers are deeply confused about the environmental impact of their motor vehicle and wider car options available to them, with almost eight out of 10 people also saying the government’s proposed 2030 ban on the sale of new petrol and diesel cars is unachievable. 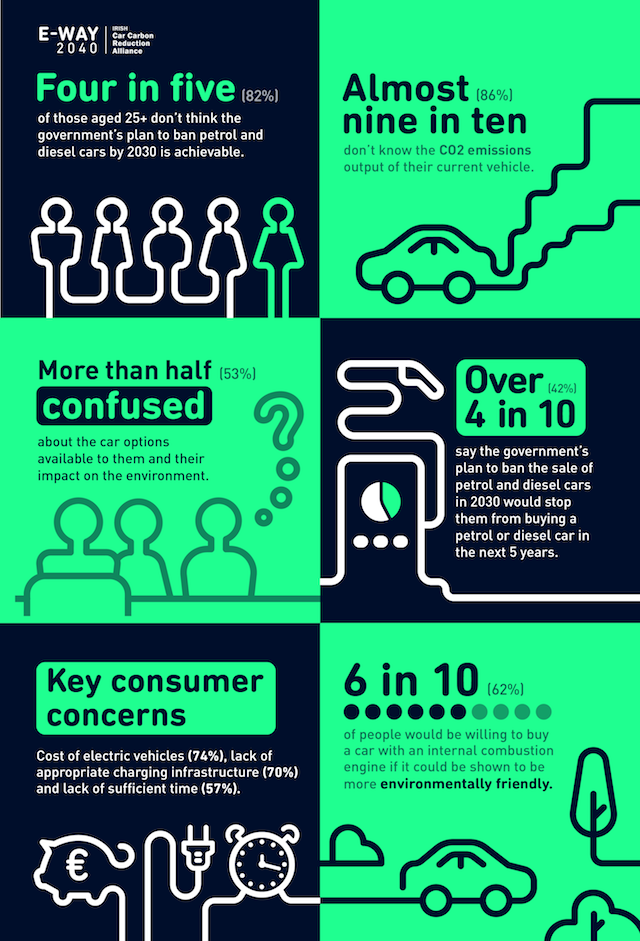 Findings were revealed today as part of a national study of over 1,000 Irish consumers by the Irish Car Carbon Reduction Alliance (ICCRA) to coincide with the launch of its new E-Way 2040 campaign.

Denis Murphy, a spokesperson for ICCRA, says that Irish consumers – and the motoring sector – are strong believers and supporters of reducing their car carbon footprint. However, they want clarity and cost-effective solutions that can have a real and lasting positive impact – not confusion and unrealistic targets.

“More than half of consumers (53%) are confused about the car options available to them and their impact on the environment. We also know that conflicting information on what is actually an environmentally friendly car is a significant concern to two thirds of Irish consumers. Furthermore, almost 9 out of 10 (86%) drivers admitted they don’t know the CO2 emissions from their current vehicle. These findings clearly show the widespread confusion among consumers, a factor which is only adding to uncertainty at a critical time as the economy begins to reopen,” he says.

The study also revealed that six in 10 (62%) of consumers would be willing to consider buying a car with an internal combustion engine if it could be shown to be more environmentally friendly. However, 42% of respondents, rising to 60% among 18-24 year olds, stated that government’s planned 2030 combustible engine ban would stop them buying a diesel or petrol engine car in the next five years. When considering an electric vehicle over half, 56% of people said they are not willing to pay a premium to go electric.  Probing further the survey highlighted that the lack of appropriate charging infrastructure (70%) and lack of sufficient time (57%) are key consumer barrier to going electric.

“Consumers have to be reassured and have access to information to make informed choices when seeking to purchase more fuel-efficient and less carbon-emitting cars, however, current government policy and the Climate Action Plan is creating a fog of confusion and red lights. This is despite the fact that current technological innovations could bring petrol and diesel engine cars close to zero emissions by 2030,” adds Murphy.

Commenting further, Murphy said that as coronavirus restrictions ease, the increased traffic would serve as a reminder of the need to incentivise immediate action to reduce fuel emissions.

“In the absence of a vaccine for the coronavirus, as we move through the phase of reopening Irish society we can expect a significant increase in traffic as commuters reconsider public transport for multiple reasons. Simply banning cars is not feasible, and so the best way to reduce emissions in the transport sector is to incentivise the replacement of old emissions-intensive cars with newer and more fuel-efficient models. By 2021 the average new car on Irish roads will emit 28% fewer car emissions than the current fleet”.

Murphy says that E-Way2040.ie is a website that breaks down the facts providing balanced impartial factual information on the latest motor vehicle options available as well as outlining a wider industry approach to get Ireland on the road to zero car emissions.

“Our E-Way 2040 campaign sets out a realistic and achievable road map towards a 2040 end of sales of petrol and diesel cars. This is in line with the target that our EU counterparts are working towards and to which all the major car manufacturers are already aligned to and committed to achieving. It’s backed by EU legislation and academic thinking as a viable long-term solution to making our roads emissions free. ICCRA is seeking a cooperative approach between Government, industry and policymakers on this important issue,” continues Murphy.

“We know from this research that electric vehicles will not be the answer for the overwhelming majority of Irish consumers for many years to come. Currently, there are around 8,500 electric vehicles on the roads, not even 1% of the Government’s target of 850,000[i] EVs on the road by 2030. Furthermore, given that the cost of your average electric vehicle is over €21,000[ii] more expensive (before subsidies) than the average new petrol car and with the lack of charging stations, especially in rural Ireland, this will not change anytime soon. The net result will be many older, emissions-intensive cars on the road much longer than they should be as consumers hold off new car purchases,”  Murphy concludes.