A Taiwanese city has teamed up with LILEE Systems, a specialist in self-driving technologies and system integrations, to launch a revenue-generating autonomous bus programme. 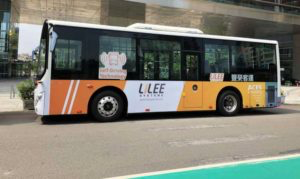 Starting later this year, the scheme will see self-driving buses operating in two business areas of Tainan, one of Taiwan’s biggest cities.If all goes well, the city will then open more of its roads to autonomous vehicles and look to extend its use of self-driving public transport.LILEE conducted a self-driving proof-of-concept in 2018 and a proof-of-service in 2019 and demonstrated high passenger satisfaction and reliable operations. Based on rail-control principles, the bus will run on fixed bus routes, remotely managed by a cloud-based, centralised operations control center (OCC) for an added layer of safety.Ming-Te Wang, Director of the Bureau of Transportation, Tainan City Government, said, “The autonomous bus project opens new opportunities for our city of ample technology resources to cultivate driverless research and development on artificial intelligence, vehicle-to-infrastructure (V2I) communications, high-definition maps, robotics and remote control.“We look forward to the partnership with LILEE Systems to enhance the current public transportation system with autonomous buses and together expand the sustainable business model from Tainan to the global market.”Jia-Ru Li, CEO of LILEE Systems, added, “Given the support of the Tainan City Government, this project will set an example of how governments can use autonomous rapid transit (ART) systems to solve public transportation challenges, such as increasing travel demands and driver shortage.”