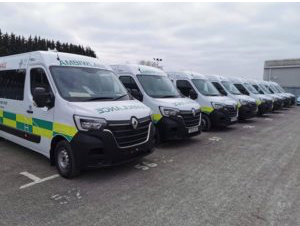 The 33 Renault Masters were in conversion at Wilker in Sandbach, Cheshire, which is one of almost 40 approved converters that were included in the Renault Pro+ Tailor Made conversion programme when the lockdown was announced.Wilker finished the Masters to WAST’s bespoke specification, which includes variants with double wheelchair access or stretcher bearing with four passenger seats.Renault Retail Group Cardiff had adapted to accommodate the safe handover of the Trust’s latest Renaults to include a dedicated technician and service advisor at the dealership for pre-delivery inspections and to prepare the ambulances.With registration completed by the DVLA, WAST was able to press the vehicles straight into service days after the vehicles arrived in Cardiff.WAST has utilised Renault vehicles for more than 20 years. In the past 16 months alone, it has taken delivery of 140 Renault Master ambulance conversions, all of which have been supplied through Renault Retail Group in Cardiff.The Renault Master makes up the vast majority of the organisation’s Non-Emergency Patient Transport Services (NEPTS) vehicles, accounting for more than 220 of the near 280-strong fleet.