Van, Truck, Trailer, Bus and Coach Aftermarket News in Ireland
Menu
HomeNewsOpel’s all-new 100 per cent electric Vivaro-e van
Opel’s first fully electric light commercial vehicle, the all-new Vivaro-e is due to arrive in Irish showrooms late this year. Opel says that it will play a key role in their rapidly evolving e-mobility range, arriving on the market in time to meet growing needs for emission-free delivery of goods and services in large urban centres across Europe. 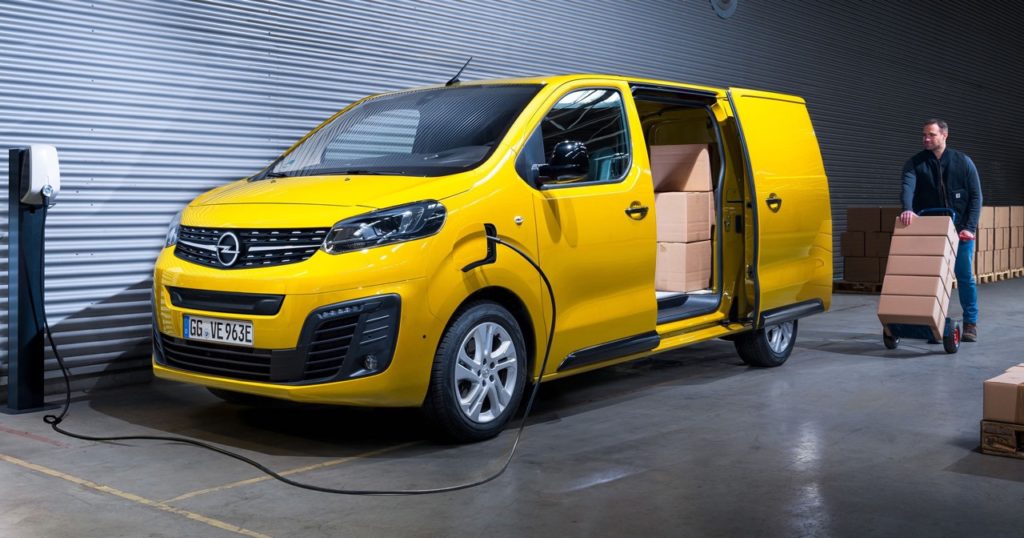 The Vivaro-e is produced in the same plant as its diesel counterpart. It will be available in a variety of lengths and body variants.
“As the first all-electric light commercial vehicle to enter the Van-D market segment of medium-sized vans, and featuring a range of up to 330 kilometres in the WLTP cycle, the new Opel Vivaro-e sets the standards for ease of use, dependability and professionalism,” said Opel CEO Michael Lohscheller.
The new electrified version of the successful Vivaro offers no compromises according to Opel. It adds that customers can still expect outstanding practicality, synonymous with diesel variants. With a payload of up to 1,275kg (diesel versions have a max payload of 1,405kg), the Vivaro-e is now the first electrified vehicle in its segment that has the ability to pull trailers, returning a maximum towing capacity of 1 tonne. Gross vehicle weight ranges from 2,800 to 3,100kg.
Opel boasts that cleverly positioned under the load cabin so as not to compromise essential load-space, the Vivaro-e is on offer with two sizes of lithium ion battery, It says that this will ensure that customers have a choice based on their business needs. The 75kWh battery boasts a range of up to a promised 330 kilometres, or for less intense usage needs, the 50kWh battery has a promised range of up to 230km (WLTP).
A sophisticated regenerative braking system, which recovers the energy produced under braking or deceleration, further increases efficiency.
The company promises that the Vivaro-e’s powerful motor generates 136hp and 260Nm of torque, which it claims surpasses most electric commercial vehicles currently on the market.
It delivers a claimed electronically controlled maximum speed of 130km/h, to preserve the electric range. Opel also says that the Vivaro-e is perfectly suited for inner-city driving, unleashing ample performance for motorway driving. The battery’s positioning under the load cabin lowers the vehicle’s centre of gravity, delivering enhanced cornering and wind stability, even when fully loaded with cargo.
Opel claims that with a 100 kW DC public charging station, the 50kWh battery charges to 80 per cent in only 30 minutes, whilst the 75kW battery takes 45 minutes. The battery is covered by an eight year / 160,000km guarantee for up to 70 per cent retention, which it says is certifiable by the Opel dealer network. It adds that thanks to an OpelConnect e-remote control function, customers can use their smartphones to check the battery’s state-of-charge or pre-programme air conditioning and charging times.
The Vivaro-e will be available in an assortment of body styles with up to three lengths on offer, and most variants measure 1.9m tall, to best service ever-expanding business needs. In its most compact length, the turn circle is as little as 11.3m, to ensure maximum agility in tight spaces. At 1.9m in height, the Vivaro-e should easily accesses shopping centre or basement parking lots.
Fitted with the practical FlexCargo load-through option on the front passenger side, the Vivaro-e’s load capacity can be increased from 4.6m3 to 5.1m 3 even in its most compact length, allowing transportation of objects up to 3.32m in length. In its longest length, with FlexCargo, the volume increases up to 6,6m3, swallowing ladders or panels up to 4.02m long. A multitude of storage areas in the cockpit, which features an electric parking brake, comfortably accommodates numerous smaller items.
And according to Opel, the Vivaro-e’s wide rear and sliding side doors give unrestricted access to the cargo area or passenger compartment, whilst optional electric side sliding doors deliver even more practicality, operated by a mere movement of foot.
Like its internal combustion engine siblings, Opel boasts that the Vivaro-e offers a wide range of driver assistance systems to enhance professionals’ safety. In addition to a large 7” touchscreen, Apple CarPlay / Android Auto and a Head Up Display, equipment dependent on trim includes Lane Keep Assist, Extended Traffic Sign Recognition, Drowsiness Alert, Semi-Adaptive Cruise Control, Forward Collision Alert, Automatic Emergency Braking and 3D navigation.
Ultrasonic sensors in the Vivaro-e’s front and rear aprons, warn the driver of obstacles when parking and monitor the side blind spot. Depending on the equipment level, a 180 degrees rear-view camera image appears on the 7” touchscreen.
The Vivaro-e continues not only Opel’s electrification offensive, taking its place beside the new electric Corsa-e and the new Grandland X PHEV ranges, but also the Vivaro’s success story that began with the first generation in 2001.
The next electric Opel LCV, the Combo Cargo-e is expected to arrive next year (2021). Opel also promises to offer an electrified version of every passenger car and LCV model by 2024.