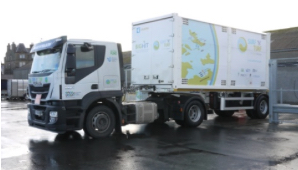 Transport News Brief talked to its CEO, Bill Ireland, about the task his company faces and the future for hydrogen in the public transport and CV sectors.Tell us about the project you will be involved in?BI: “We were selected by Irish gas and electricity supplier, Energia, which is a Lead Partner organisation in the €9m EU-funded ‘GenCOMM’ project. GenCOMM aims to address sustainability challenges of communities in Northwest Europe through the implementation of smart hydrogen-based energy and commercial models. We believe we offered the most innovative and cost-effective tube trailer solution with our trailer suppliers, Calvera.“We will be involved in the whole process from producing the hydrogen to transporting it to dispensing it into vehicles, not just supplying the trailers transporting the hydrogen.”What is the exact process then?“At one of Energia’s windfarms they want to generate hydrogen from the lower value or surplus energy. An electroliser and compression equipment are being installed at the windfarm to create the hydrogen, while the trailers will be driven to the windfarm where they will be filled up. They take the hydrogen to a refuelling station – supplied and maintained by us – where it will be dispensed into hydrogen fuel cell buses operated by Translink.”How many trailers are you using to carry out this operation?“Three. One at the refuelling station, one being filled at the windfarm and one either going from one to the other. They can carry up to 324kg of hydrogen. That may not sound like much, but in a conventional passenger vehicle that will take you more than 30,000 miles. Hydrogen has the highest energy-to-mass ratio of any substance in the known universe. It’s light but it’s full of energy!”What is the challenge of transporting hydrogen?“In this instance we are transporting a compressed gas. Any compressed gas has stored energy as it is compressed. There is a danger in that respect, but that’s the case with any compressed gases be it nitrogen, oxygen or natural gas.“Hydrogen is a flammable gas, as are other gases, so there are precautions you have to take. There are European directives on how you do that, and these trailers must comply with these standards like any other tankers.”What does Logan Energy do?“We are involved in pretty much every bit of the energy supply chain. We look at whole energy systems, undertaking feasibility studies to see what makes economic and practical sense. We electrolise, compress and transport hydrogen either using trailers or through a pipeline. At the other end, we deal with the use of the hydrogen, so we are converting vehicles as well as generating electricity and heat using fuel cells. By converting battery electric vehicles (BEVs) to hydrogen fuel cell vehicles you can quite easily double its range.”How do you see the adoption of hydrogen in the mass transport sector in the UK in the years to come?“I think Australia will be one of the first countries to do this on a commercial basis because of energy network and renewable resources. They have remote communities all over the place and currently they have their energy trucked in. They have a lot of sun and wind, however, so they can become energy independent and economically viable as well as having energy security.“In the UK, there aren’t going to be many alternatives to hydrogen for high-energy-using transport with the phasing out of diesel and petrol vehicles over the next 10-30 years. The amount of batteries needed means you just can’t do it. If you are looking at HGVs or buses, the advantage of hydrogen is that if you want to go further you just put in more hydrogen and, it also has the benefit of being a very light fuel. If you want to go further with a BEV you have to add more batteries and they are incredibly heavy.”If hydrogen is the answer why haven’t we adopted it for mass use already?“It all depends on policy. At present, if you are a bus company, you get a rebate on your diesel price – maybe 35%. If you use hydrogen you don’t get anything. Because the hydrogen sector is quite disparate, we are not getting the message across very well but that is starting to change, gradually.“It doesn’t necessarily need to cost people or the government a lot of money to deploy hydrogen into the energy sector, it just needs to be on a level playing field and the added benefits of zero pollution, local production and ability to sector shift given a true value.”