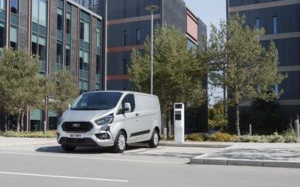 The company has also announced that its production version of the new Transit Custom plug-in hybrid has been approved for the Plug-in Van Grant in the UK, while the 2-tonne Transit will enter a new electrification phase in Europe with an all-electric Battery Electric Vehicle (BEV). A launch date for the electric Transit is to be confirmed.A spokesperson said that the Fiesta Van with the new hybrid powertrain due to be launched later this year promises to be a great option for small businesses looking to cut their carbon footprint.Adding: “It’s the likes of the florists, the bakers and other traders forming the backbone of our communities that will find the Fiesta mild hybrid van will meet their needs and help to reduce their costs. It’s a small, but perfectly-formed commercial vehicle and we anticipate that it will be a popular choice for many.”The Fiesta Van should be available with mild-hybrid (mHEV) technology on 125PS variants of the 1.0-litre EcoBoost, targeting CO2 emissions of 96g/km and fuel economy of 56mpg (NEDC).Meanwhile, just over a year ago, the trials of the Transit Custom Plug-in Hybrid (PHEV) got underway. The Transit Custom PHEV is now on sale and has since been approved in the UK for the Plug-in Van Grant by the Office for Low Emission Vehicles (OLEV).The plug-in hybrid version gains geofencing technology as part of its FordPass Connect telematics package from later this year. This enables the vehicle to automatically switch to zero-emission driving on ‘EV Now’ mode when entering a low-emission zone, or a user-specified geofenced area.FordPass Connect modems will feature as standard on all Ford commercial vehicles – Fiesta Van, all Transit and Tourneo family models and Ranger pick-up, and as an aftermarket option for Courier.