Base Coach Sales in the UK has offered a first glimpse at its newly-developed MOBIpeople Executive Coach. 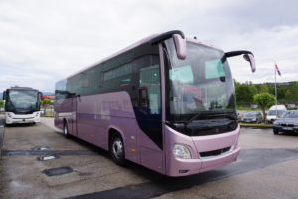 The UK dealership, based in Leyland unveiled the first prototype which has been built for a travel company. When arrives in the UK from the MOBIpeople factory in Portugal, it will then head to AD Coach Systems in Congleton to be converted to the operator’s ‘team coach’ specification.It utilises a MAN RR2 430bhp chassis, but a version with a Scania chassis will also eventually become available.Up to 57 seats are available with a centre sunken toilet (or 55 with a rear-floor-mounted toilet).Antonio Catarino, General Manager of MOBIpeople, added, “We have worked closely with BASE and a number of their customers to deliver what we believe to be an excellent balance between attractive styling and class leading functionality.”