New research from Drinkaware, the national charity working to prevent and reduce alcohol misuse, shows that updated drink driving legislation is positively influencing driver behaviour in rural areas. The updated Road Traffic (Amendment) Act 2018, in effect since October 2018, increased the penalty for drivers detected with a blood alcohol concentration (BAC) between 50mg and 80mg to three months disqualification from driving plus a €200 fine. 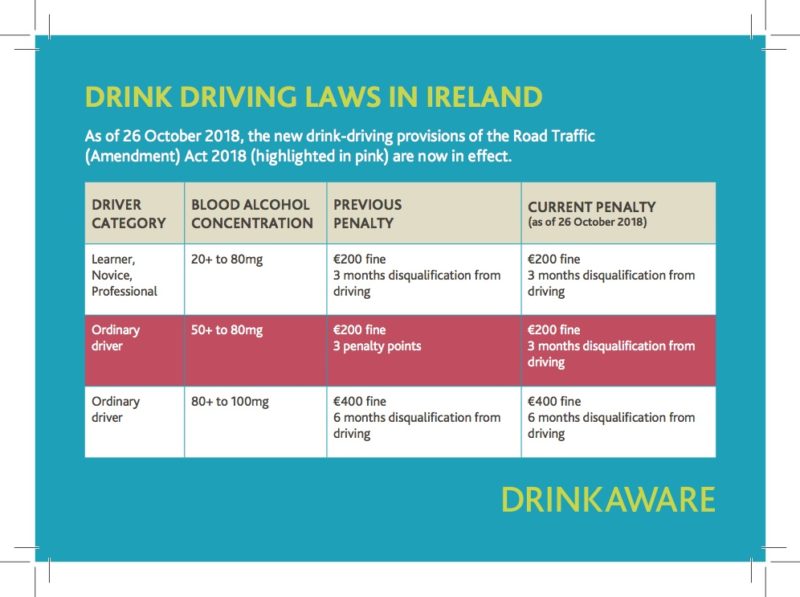 The nationally representative survey, conducted by Behaviour & Attitudes with 1,000 adults on behalf of Drinkaware, asked drivers to identify any changes they had made to their driving behaviour in the period January to June 2019, three months after the legislation came into effect.

The research also found that 64 per cent of Irish adults believe there should be an official breathalyser for personal use.

Commenting on the research, Sheena Horgan, Drinkaware CEO said: “As a proud supporter of the collective campaign to introduce new drink driving provisions of the Road Traffic (Amendment) Act 2018, we are encouraged by our research which indicates that the updated legislation appears to be having the desired effect.

People contact Drinkaware every day with queries about alcohol and driving, in particular when it is safe to drive the morning after and for information on breathalysers for personal use. Consumers need to be mindful that most off-the-shelf breathalysers are not developed using the same medical and safety technology standards as those used by officials like the Gardaí. While they can be useful for information purposes, the results should not be taken as a clear indication that you are under the limit.

Communities throughout the country have witnessed the devastation drink driving can bring and it is time for the consistent one in 10 drivers who continue to get behind the wheel after consuming alcohol to cease this dangerous behaviour.

Drinkaware strongly supports official advice from the Road Safety Authority and An Garda Síochána that any amount of alcohol will affect your ability to drive. While it’s clear that drink driving remains an issue, we are encouraged to see drivers making positive changes to help keep our roads safe.

Drinkaware encourages everyone to get the facts on the limits, the law and the penalties for drink driving, and the consequences when someone chooses to ignore the wealth of information that’s out there.”