Van, Truck, Trailer, Bus and Coach Aftermarket News in Ireland
Menu
HomeNewsNew UK HGV registrations up while bus/coach down for 2019

Meanwhile new bus and coach registrations fell for the third consecutive year in the UK, with just 5,874 units registered in total, seeing a 18.8 per cent drop on 2018.

These figures come from the Society of Motor Manufacturers and Traders (SMMT), who said an increase in HGV registrations in the first half of the last year, ahead of the mandatory fitment of Smart Tachographs, gave a further boost to registrations following two years of decline.

Registrations of rigid trucks grew 10.6 per cent, driven by a double-digit percentage increase in the >6-16T segment and a smaller 8.4 per cent rise in demand for trucks >16T. Elsewhere, the market for articulated heavy trucks also rose, up 12.6 per cent as 22,191 models joined UK roads, with popular 3-axle artics enjoying a 14.5 per cent boost.

In 2019, tractors remained by far the most popular segment, taking 44.6 per cent of the market, with demand growing 12.9 per cent. Box vans and tippers also experienced growth, up 27.2 per cent and 9.4 per cent respectively. Meanwhile, curtain sided vehicles experienced a small decline, down -4.4 per cent compared with the previous year. 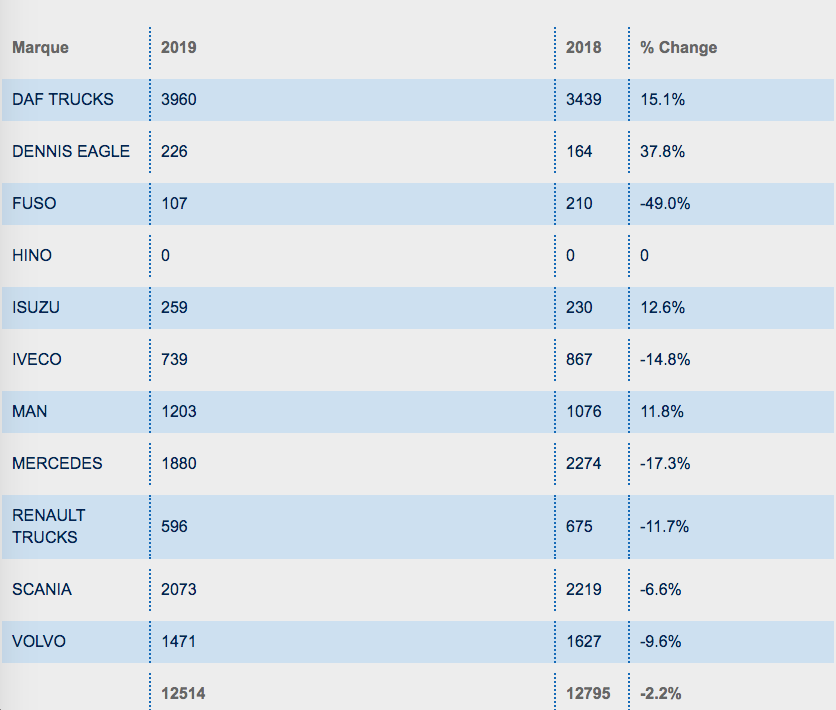 While the new bus and coach market fell for the third consecutive year in the UK, the SMMT said last year ended on a positive note for the sector, as an 18.5 per cent growth in Q4 brought an end to 11 straight quarters of decline.

Growth in the fourth quarter was driven by minibus registrations, which were up 49.0 per cent to 1,311 units, while the market for single-deck and double-deck buses was down -13.0 per cent and -27.8 per cent respectively during the period.

In the full year, demand across all body styles declined in double figures, with minibuses falling the most with a -22.7 per cent drop in registrations. Single-deck and double-deck registrations were down -10.7 per cent and -19.5 per cent respectively. The SMMT said this was due to a combination of weak business confidence, declining passenger numbers and confusion over clean air zones depressed demand. 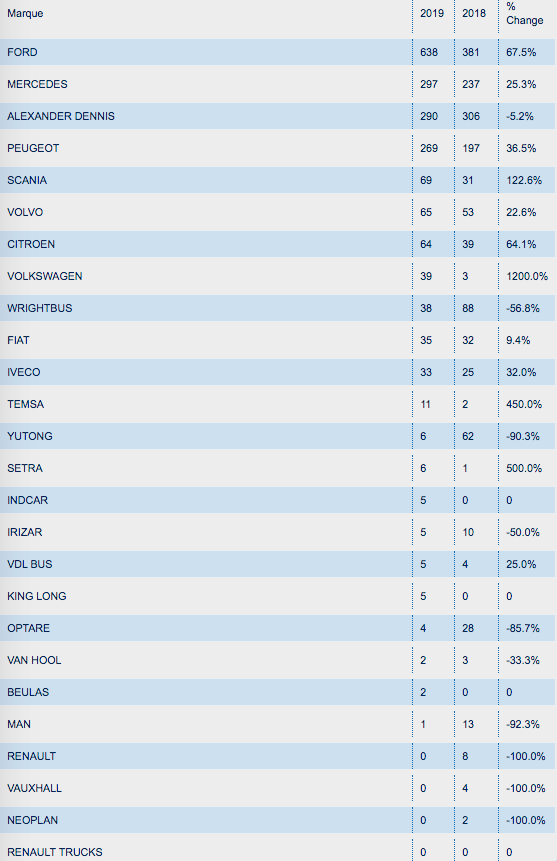 Nigel Base, SMMT commercial vehicle manager said a third straight year of decline for the bus and coach sector is worrying. “While the market is cyclical, there’s no doubt that operators face many challenges in the current volatile climate,” Base said. “While the [UK] government’s announcement of a National Bus Strategy is welcome, now we need to see the implementation of a plan that will encourage passengers on to local buses, stimulate fleet renewal and get more of the latest, lowest emission buses and coaches on to local roads.”