Blackpool Transport Services (BTS), the iconic seaside resort’s public transport operator, has estimated that the renewal of its fleet with cleaner and more efficient buses is saving it £300,000 a year. 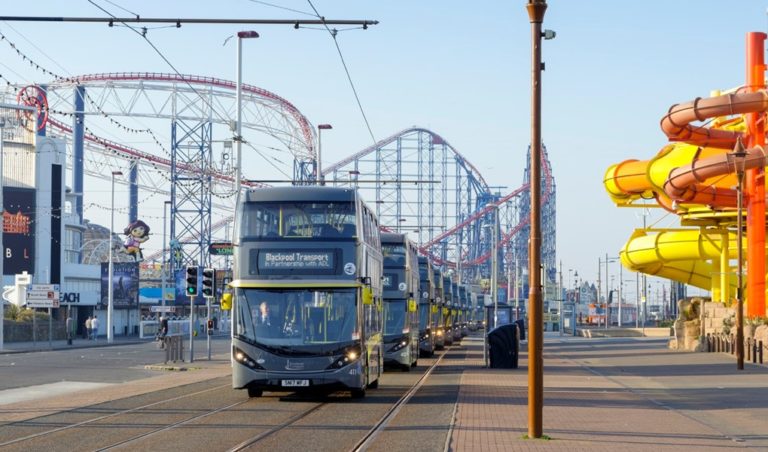 In 2016 the council-owned operator adopted a strategy of ensuring that the average age of the buses on its fleet are all less than three years old.

Since then it has bought over 100 single and double deck buses from Alexander Dennis, replacing older and non-Euro 6 compliant vehicles.

Working in partnership with Alexander Dennis, the company’s fleet transformation will be completed in 2020 with the arrival of the latest 19 buses. This will take to 107 the total number of Enviro200 single deckers and Enviro400 double deckers supplied over five years.

With the first replacement cycle complete, discussions have begun about a continuation of the programme in order to maintain the high standards now achieved.

Upgrade of current fleet already saving
But even before the latest buses have joined the fleet, Blackpool Transport is feeling the benefits of its innovative approach.

According to the company’s financial forecast for 2019/20, the current fleet costs £300,000 per annum less to operate that the 2015/16 fleet, thanks to a variety of operational cost savings.

The upgrade of the fleet has also contributed to improving air quality in Blackpool which, according to the think tank Centre for Cities, has the smallest proportion of fatalities linked to deadly toxins from poor air quality in England and the fourth smallest in the UK.

Making use of ADL’s SmartPack efficient diesel technology, fuel efficiency has improved 17 per cent and spare vehicle provision was reduced thanks to the better reliability of the new fleet, which benefits from close aftermarket support by Alexander Dennis that has also allowed the operator to remove £70,000 of parts stock from its balance sheet.

Richard Matthews, Sales Director at Alexander Dennis, said, “Over the last years, Blackpool Transport and Alexander Dennis have shown what can be achieved by working in partnership. Blackpool now has perhaps the most modern bus fleet in the country, saving the operator money and giving passengers the best possible journey experience. We are proud to have played our part in achieving this transformation.”