The most popular vans of 2019 in the UK have been revealed by the Society of Motor Manufacturers and Traders (SMMT).

Registrations were up by 2.4 per cent over the year, making it the most successful year for van registrations since records began. 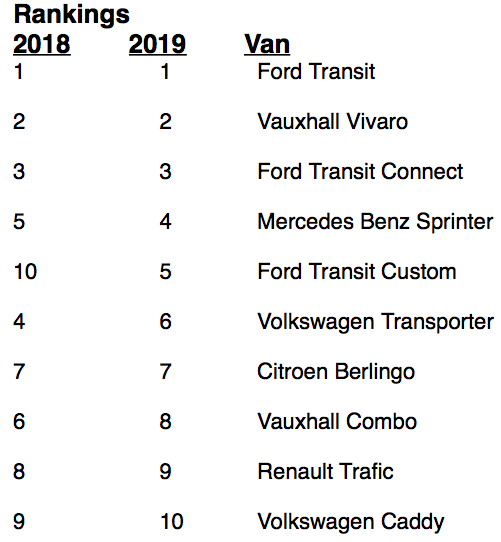 The top three in the UK van sales remained in similar order to the previous year – The Ford Transit holds on to the top slot, followed by the Vauxhall Vivaro, with the Ford Transit Connect also maintaining third place. The Citroen Berlingo also held on to seventh place in the sales chart.

Biggest gain was a jump from tenth to fifth for the Ford Transit Custom. The other mover was the Mercedes-Benz Sprinter, up from fifth to fourth.

The Volkswagen Transporter dropped two places from fourth to sixth, the Vauxhall (Opel here) Combo dropped from eighth to sixth, with both the Renault Trafic and Volkswagen Caddy dropped one place last year.

The SMMT figures show the market grew 7.8 per cent in December, as the impact of regulatory changes eased and attractive offers on new models helped stimulate orders with only pickups experiencing a fall in demand.