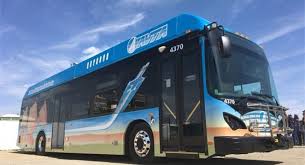 It now aims to become the first transit authority in the United States with a 100% electric bus fleet.

AVTA Chairman, Marvin Crist, said, “Thus far, approximately 512,821 gallons of diesel fuel have been saved with the new battery electric fleet. This equates to a net savings of $801,190 in fuel costs after paying for electricity.

“Even more impressive, those two million all-electric miles represent a carbon footprint reduction of more than 12 million pounds of CO2 and 29,063 pounds of particulate matter.”

AVTA’s current fleet of electric buses – now more than 50% of its total fleet of 88 vehicles – have been manufactured by BYD at its plant in Antleope Valley as part of a five-year deal.
As part of the overall project to electrify its network, the authority has also installed ground-breaking inductive

AVTA Executive Director and CEO Macy Neshati, said, “Our goal from the start was to be the first transit agency to implement electric bus technology on a broad scale, and we have met that goal.”