The big-selling Mercedes-Benz Citaro bus is enjoying a strong end to 2019. 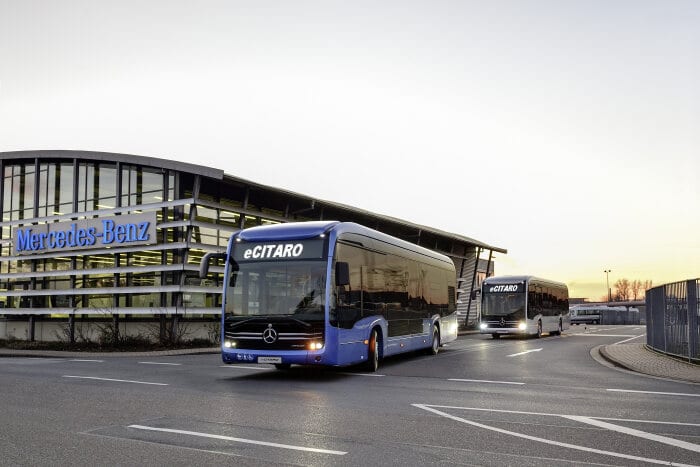 First, the 55,555th Citaro, an all-electric eCitaro bus, rolled off the production line and was delivered to public transport provider Bergkvarabuss AB in the Swedish port town of Trelleborg.

Roman Biondi, Head of Sales at Daimler Buses: “The Citaro is a milestone in bus history. And with the arrival of the eCitaro, its development has entered a new phase. It is our answer to the need for quiet and locally emission-free urban buses.”

The anniversary bus is part of an order for ten eCitaro buses for use in Trelleborg. It is the second eCitaro order which Bergkvarabuss AB has placed. The bus company based in Kalmar on southern Sweden’s Baltic coast is active in all manner of bus travel, be that school buses, regular-service lines and inter-city routes. Bergkvarabuss AB operates shuttle buses to cruise ships in port towns. The company has more than 30 locations in Sweden, Denmark and Germany and has a fleet of more than 1000 buses.

The buses will be charged at a purpose-built depot located near the route and ‘topped-up’ during breaks between journeys.

Hermann Fröhlich, Head of the South-West Sales Region at Daimler Buses, said, “Reutlingen is a good example of how the change in our mobility approach within public transport companies can work. In creating a new, purpose-built depot, RSV is already putting in place what it needs to fulfil the requirements of purely electric public transport for tomorrow. In supplying the eCitaro, we also wish to contribute towards their success in this field.”