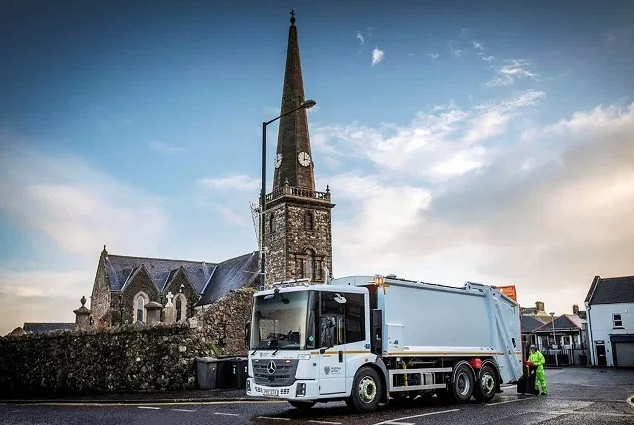 The nine 6×2 Econic 2630 L models were supplied by Dealer MBNI Truck & Van, via specialist municipal provider RD Mechanical Services – both are based in Newtownabbey. The trucks are powered by 7.7-litre in-line six-cylinder engines which transmit their 220 kW (299 hp) outputs via six-speed Allison automatic gearboxes, while rear-steer axles provide optimum manoeuvrability. They are fitted with Dennis compactor bodies and Terberg lifters.

Mid and East Antrim Borough Council was formed in 2015, following the merger of three former local authority areas. The new body inherited a mix of vehicles of various sizes, configurations and ages – Waste Operations Manager Neil Patrick is overseeing the process of modernising the fleet, and the arrival of the new Econics represents a major step in the right direction.

“Some of the older trucks we had on the fleet were rather long in the tooth but these Mercedes-Benz trucks will bring a range of benefits,” he asserted. “I know from experience of having operated Econics in the past that they are extremely reliable, while the design of the cab means they offer excellent levels of comfort, ease of use and safety for our crews and other road users.”

The Econic’s air-conditioned, low-entry cab is easy to access and walk through, enhancing health and safety for operatives. The deep, wraparound windscreen provides a benchmark level of direct vision which helps to protect vulnerable road users. The vehicle also comes with a standard-fit armoury of driver assistance systems which exceed legislative requirements.

To these, Mid and East Antrim Council has added the optional Sideguard Assist system. This employs two short-range radar sensors mounted on the passenger side of the vehicle, which support drivers when making left turns or changing lines in congested areas, by triggering optical and acoustic warnings to alert them to the presence of cyclists and pedestrians alongside. “The system is absolutely essential when operating in narrow streets which are often lined with parked cars,” said Mr Patrick.

The trucks are now operating in and around the towns of Ballymena, Carrickfergus, and Larne, collecting household waste and organic recyclables. They have joined a fleet which now extends to 32 refuse collection vehicles.

“We’re delighted with the Econics,” Mr Patrick continued. “As well as being reliable and safe, the fact that they have replaced older vehicles which did not meet the latest emissions standards means they are also contributing to our efforts to minimise the effect of our operations on the local environment.

“We’ve been impressed too, with the customer service from Mercedes-Benz throughout the acquisition process – MBNI Truck Sales Manager Sean Clarke and Sales Executive Paul McCrory, as well as Mercedes-Benz Trucks UK Municipal Specialist Philip Chance, have been extremely attentive and helpful, and worked closely with RD Mechanical to deliver vehicles which are perfectly specified for our needs.”