Ford is celebrating a clean-sweep of the light commercial vehicle awards season as the electrified Ford Hybrid Transit Custom line-up is today named International Van of the Year (IVOTY) 2020, and the Ford Ranger is named winner of the International Pick-up Award (IPUA) 2020.

The new Transit Custom Plug-In Hybrid and Transit Custom EcoBlue Hybrid models were collectively judged winners of the prestigious annual IVOTY award by a jury of 25 specialist journalists from 25 countries across Europe, at a special ceremony in Lyon, France.

Based on the latest data, Ford says that the Ranger is Europe’s No. 1 best-selling pick-up. It has a more powerful and fuel-efficient 2.0-litre EcoBlue diesel powertrain and advanced driver assistance technologies. 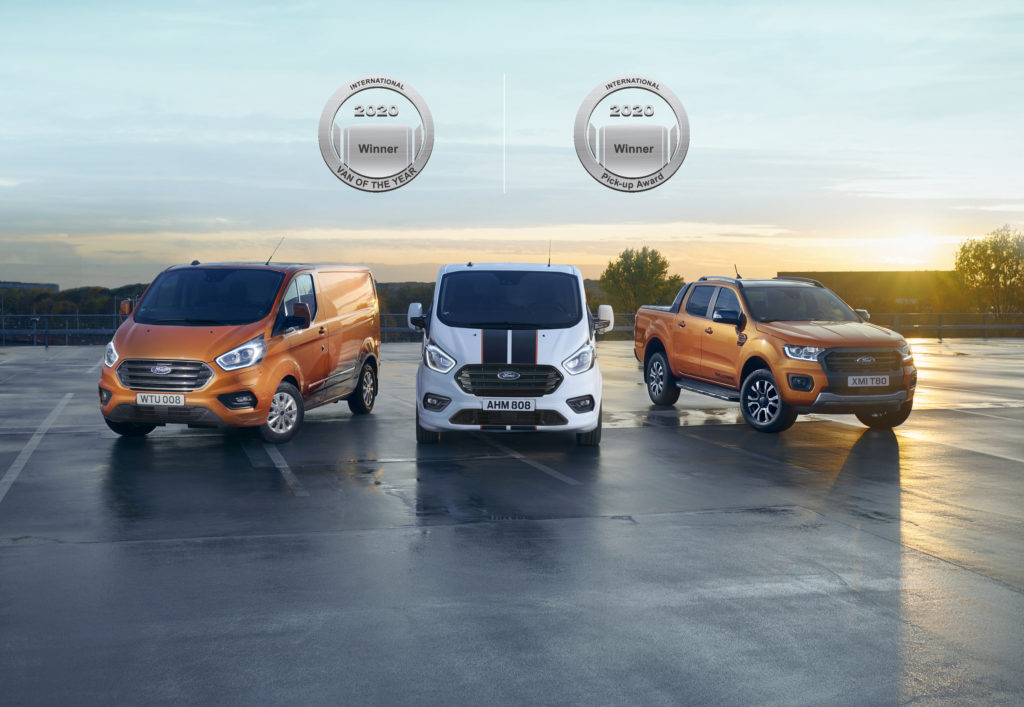 “Our new Transit Custom Plug-In Hybrid and EcoBlue Hybrid models are the right vehicles at the right time – helping our customers reduce costs and emissions, and meeting the challenges of operating in today’s business environment without sacrificing practicality or payload. And our new Ranger is raising the bar for refinement, technology and productivity in the pick-up segment,” said Hans Schep, general manager, Commercial Vehicles, Ford of Europe.

The Transit Custom EcoBlue Hybrid’s mild-hybrid powertrain uses a belt-driven integrated starter/generator in place of the standard alternator, enabling recovery and storage of energy during vehicle decelerations, and charging of a 48-volt lithium-ion air-cooled battery pack. The stored energy is used to provide torque assistance to the engine and has been optimised to deliver up to an 8 per cent fuel efficiency improvement for Ford’s further enhanced 2.0-litre EcoBlue diesel engine.

Ford says as Europe’s No. 1 commercial vehicle brand for the year to date, it is delighted that sales for Transit Custom reached 114,000 in October, up 2.6 per cent year on year. In addition, the Ranger is Europe’s No. 1 pick-up, with sales of 43,300 for the same period.