ITIA in partnership with An Garda Siochána and RSA conduced a tyre safety campaign right thoughout road safety week this year, October 7-13. During the week An Garda Siochána carried out roadside checks specifically for tyres and advised motorists on how to check their tyres. This was supported by a jointly designed tyre safety leaflet.

ITIA members were supported with a radio advert advising motorists to get their tyres checked by expert ITIA technicians. Members received the safety leaflet and a poster. NEC member Fergal Eiffe of Leixlip Tyre Services also appeared on Morning Ireland and Virgin TV and radio to drive home the message of the importance of checking tyres.

The campaign was extremely successful and this is evidenced by an increase in calls to ITIA from consumers asking where their nearest ITIA outlet is. Members also reported an increase in customers coming in for tyre checks and a subsequent increase in sales.

Throughout the campaign a coordinated social media effort saw An Garda Siochána and RSA posting photos of tyres that were checked which were well below minimum tread depth and with major defects. 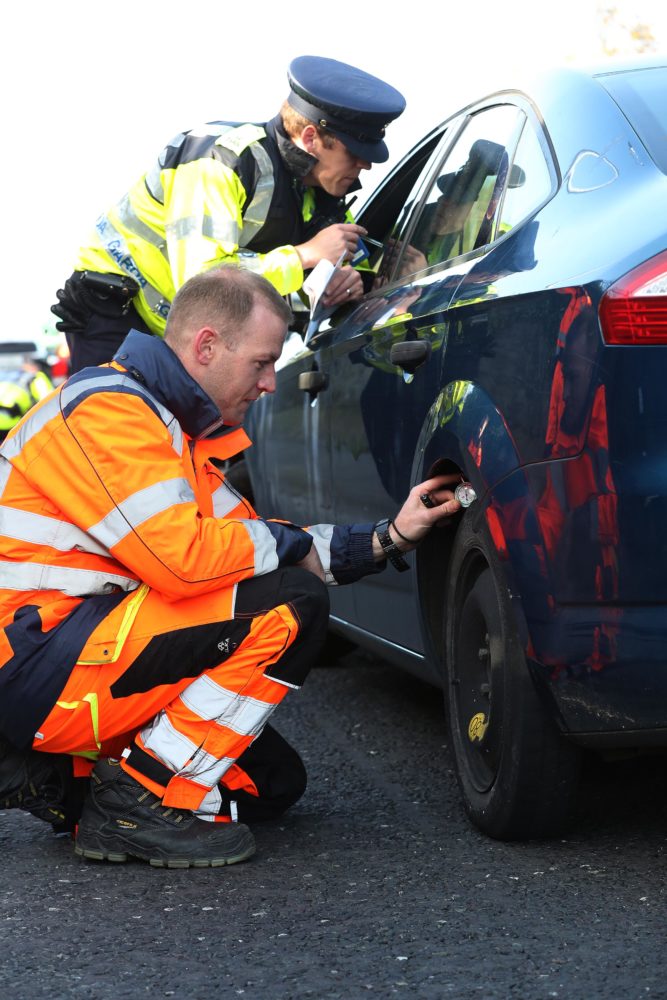 Speaking following the campaign, ITIA CEO Sue O’Neill said: “The success of this campaign was due to the coordination between ourselves, An Garda Siochána and RSA and I am very appreciative of the support that both organisations give to the promotion of tyre safety. As defective tyres are a contributory factor approximately 14 deaths every year we need to keep drive home the message, not just during road safety week but continuously, that checking your tyres has to be an essential part of looking after your vehicle and ultimately your safety.”

At the first roadside check RSA CEO, Moyagh Murdock said: “Each month 8,500 vehicles are classified as being dangerously defective for ‘Tyre Tread’ and ‘Tyre Condition’ across the NCT and CVRT testing systems. Driving on dangerous or under-inflated tyres puts your life and the lives of other road users at risk so don’t wait until your NCT comes around to check the health of your tyres, get to an ITIA dealer next week.”

Assistant Commissioner David Sheahan, Garda National Roads Policing Bureau, An Garda Síochána added: “It is illegal for a vehicle to be driven on a public road with dangerous defects which means the driver may incur penalty points and a court appearance if detected by An Garda Síochána. If you are found to be driving a vehicle with defective or worn tyres you could face up to four penalty points if convicted and a fixed penalty of up to €120. Members of the Roads Policing Unit across the country will be mounting road side checks in conjunction with Road Safety Authority Vehicle Inspectors checking tyres on cars, trucks and buses at the roadside.”