Van, Truck, Trailer, Bus and Coach Aftermarket News in Ireland
Menu
HomeBrandsPartnerships and hybrids – a new standard In logistics
Close cooperation and partnerships are essential to developing new logistics solutions in the cities of today and tomorrow. In the Netherlands, Scania, HAVI and SUEZ are joining forces to make McDonald’s supply chain even more sustainable. 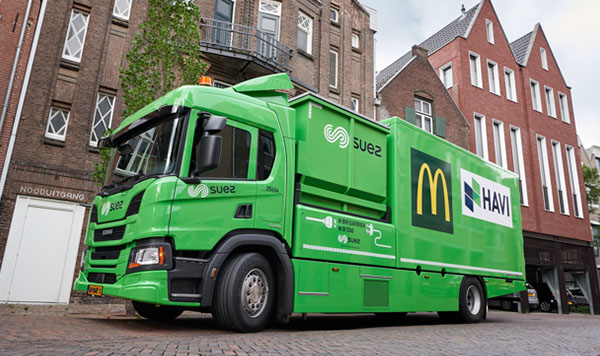 In a quite backstreet in downtown Den Bosch, Irma van Hoof is waiting for a high-tech vehicle. Together with her husband, Hans, she is the owner and operator of one of the oldest McDonald’s restaurants in the Netherlands.Business is going well and she loves her job. But in recent years, the ageing neighbourhood has been complaining about noise and fumes from the vehicles that serve her premises.Not any longer. The hybrid truck backing into the alley is silent and clean. It’s also purpose-built for waste management, separately collecting eight different residual flows in a single stop: cardboard, plastic, PET, organic waste, coffee grounds, aluminum, deep-frying oil, and residual waste.“It’s such a big change for us, this new hybrid truck,” says Irma. “We have been running our business here in central Den Bosch for many years now. During that time, we have seen our city centre steadily change into a more sustainable place. And this vehicle is, for sure, the future.”The next stepIn the Netherlands, waste and recycling company SUEZ and logistics provider HAVI have both been providing services to McDonald’s for a quarter of a century, constantly working to improve sustainability in the logistics waste chain. In addition, Scania and HAVI are working together to reduce the ecological footprint of McDonald’s logistics. In 2017, they signed an international agreement to reduce the number of diesel-powered vehicles by switching to hybrid or gas-driven vehicles.Challenging approachJust like Scania, SUEZ needs partners who take the lead in continuously developing new, sustainable transport and logistics solutions.“We have a challenging approach,” says Iwan te Winkel, Director of Fleet and Logistics at SUEZ Netherlands. “To develop our vehicle fleet, good partners are very important. For example, we can challenge Scania with our specific demands and Scania will come up with the options we need for a more sustainable future. I truly believe partnership is a prerequisite for understanding what the future can bring in sustainability.”The last kilometersIn central Den Bosch, SUEZ driver Michel Jacobs says goodbye to Irma van Hoof after loading all the waste from her restaurant. Silently, he slides out of the alley and sets course for Arnhem and the next McDonald’s restaurant on his daily tour of central Netherlands. On each route, his hybrid vehicle services between 11 and 13 restaurants. After leaving the highway or provincial road, it travels the final kilometers using electric power. From then on, the equipment used to collect waste also runs on electricity. All the activities on and around the site of a McDonald’s restaurant generate zero emissions.A major impactAs Theo Althuisius, Business Development Manager at HAVI, explains, the partnership in the Netherlands is engaged in a continuous process of sustainability improvements. “McDonald’s asks us to collect and process all its waste as sustainably as possible. Together, we determine the measures and investments that are required to achieve this. Once a proposed measure is given the green light, it is immediately implemented at all restaurants. That way, every measure has a major impact.”

“For example, it was recently decided to collect coffee grounds separately before they go to the people who use them to produce soap and pallets. Precisely because we pick up the grounds at all McDonald’s restaurants, you can immediately talk about collecting more than 250,000 kilos every year.”Plug-in hybrid and hydrogenAs Maintenance Manager for SUEZ in the Netherlands, Edwin Kramer has followed the McDonald’s partnership for 12 years. “During this time, we have progressed from using a big truck to successively smaller trucks, because the big ones were no longer allowed into city centres,” he says.“But we will not stop developing this new hybrid truck from Scania. Soon, we would like to switch to the plug-in hybrid and hopefully also hydrogen-fuelled trucks.”New standard in logisticsTheo expects collaborations such as this one in the Netherlands will become increasingly common in the logistics sector. “Regulations covering the supply to inner cities are becoming increasingly strict and they also differ according to city or region,” he says. “So, it’s becoming more difficult to adapt your fleet to that – and to do it alone. By joining forces, you can work smarter, more efficiently and more sustainably while also complying with all regulations.” 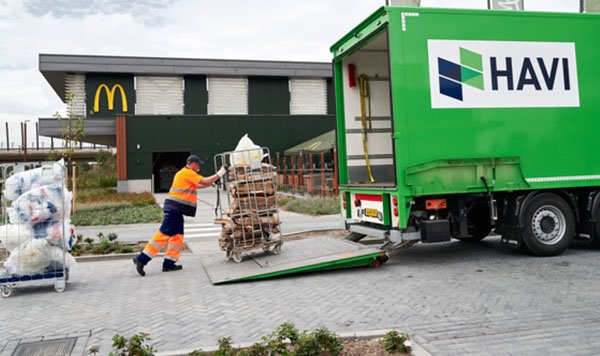 Theo talks about the ‘city hubs’ that are rapidly emerging outside city centres. “These transfer points are supplied by larger transport companies with the big trucks. From here, smaller, electric vehicles enter the city centres. Put simply: you can’t rig up such a system without working together in the way Scania, SUEZ and McDonald’s do. This will be the new standard in logistics, and those who do not go along will fall behind,” he concludes.