Ford tells us that it is introducing its most intelligent, fuel-efficient, capable and productive 2-tonne Transit van ever. It adds that it was developed to help businesses thrive in a modern operating environment. 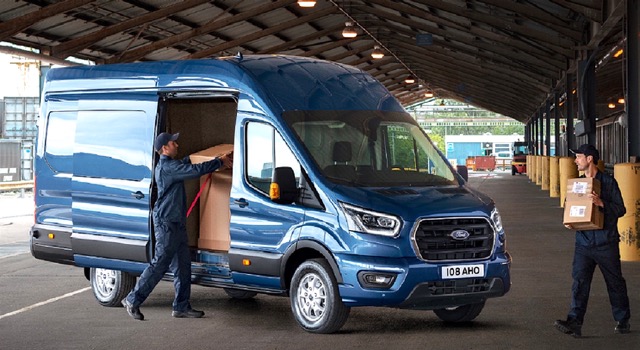 The blue oval brand claims that there are more than 4,600 upgraded components alongside advanced powertrain and driver assistance technologies contribute to a new Ford Transit that can carry more, uses less fuel and is easier to drive and operate.

Ford says that enhanced versions of it’s sophisticated EcoBlue diesel powertrains help reduce operating costs by delivering up to seven per cent fuel efficiency improvements, with up to a further 8 per cent fuel saving offered by Transit’s new EcoBlue Hybrid powertrains – the first 48-volt mild-hybrid technology to be introduced to the segment.

“The iconic Ford Transit raises the bar once again to boost productivity for businesses, delivering increased payload, improved fuel efficiency and advanced connectivity that will give companies of all sizes the tools to maximise operational efficiency,” said Michael McDonagh, Transit global chief programme engineer, Ford of Europe, and a man with strong Irish roots in Co Sligo.

He added: “Ford is also setting the pace in electrification, with segment-first mild-hybrid powertrains ideal for deliveries.”

The new Ford Transit is now on sale across Europe and builds on the success of the outgoing model, which has helped to establish the Transit nameplate as the leader in its segment in both Europe and North America. Sales growth in Europe has continued during 2019 with the Ford Transit range setting a second quarter record of 68,800 sales in 2019, up 2.7 per cent from the second quarter of 2018.