Van, Truck, Trailer, Bus and Coach Aftermarket News in Ireland
Menu
HomeCompanyGeo-fencing tech makes new buses greener
It was interesting to read that a new generation of electric buses being introduced to Brighton and Hove as a smaller city of less than 290,000 people. It will be utilising geo-fencing technology, which enables buses to switch into zero-emissions mode in the area’s Ultra-Low Emissions Zone.
The operator (Go-Ahead Group) will introduce 30 of the new buses to its fleet in the area as part of a Stg.£10 million investment in greener transport. 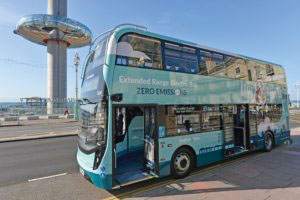 The buses are fully electric, driven by an electric motor at all times, but feature a small built-in Euro 6 diesel generator which can be used to recharge the battery.The ability to use a generator outside of the ULEZ area means the buses can cover longer distances and manage steeper gradients than a traditional electric bus. It also eliminates the city’s need to invest in expensive charging infrastructure.The unique geo-fencing system will automatically deactivate the generator and ensure the bus switches to zero emissions mode when entering the Ultra-Low Emission Zone.Almost 98 per cent of bus movements in Brighton pass through the zone.