It is always good to keep an eye on commercial vehicle sales are going in the UK and Europe. And in September 2019, EU commercial vehicle registrations dropped for the first time this year (-10.0%), bringing an end to eight months of consecutive growth. 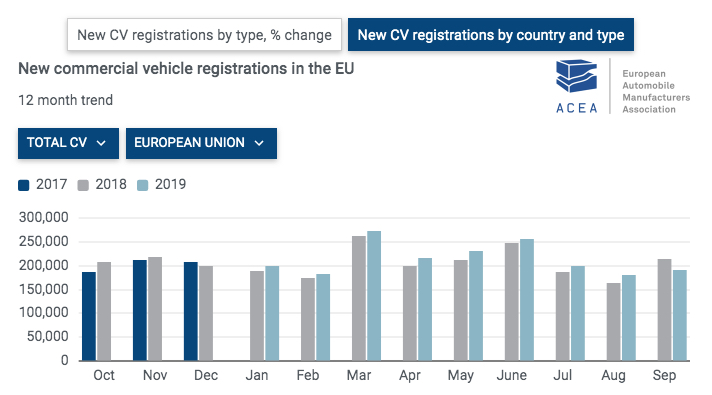 In September 2019, EU commercial vehicle registrations dropped for the first time this year (-10.0%), bringing an end to eight months of consecutive growth. Demand fell across all segments and in all major EU markets, with the exception of Italy (+8.8%) and France (+2.5%). The UK, still facing Brexit uncertainty, recorded the strongest decline last month (-22.0%), followed by Germany (-11.5%) and Spain (-4.2%).

Nine months into the year, demand for new commercial vehicles remained positive (+4.6%) in the EU, despite the decline in September. With a double-digit increase (10.9%) Germany led this growth, but the four other major markets also posted positive figures so far this year: France (+6.1%), the United Kingdom (+5.1%), Italy (+4.9%) and Spain (+1.5%). 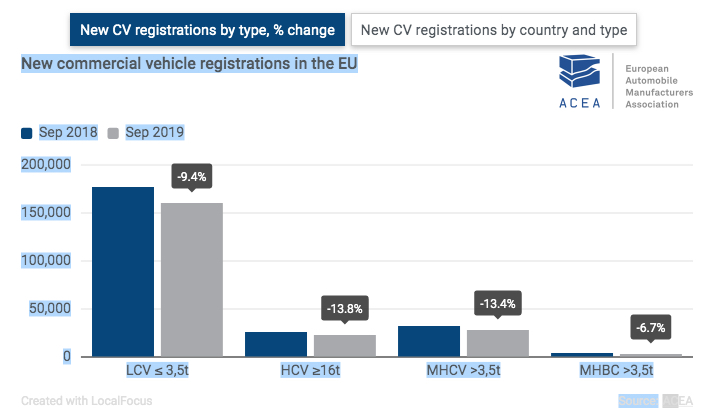 September 2019 results showed a 9.4 per cent drop in registrations of light commercial vehicles across the EU. The main reason for this decrease is that new van sales are subject to the WLTP emissions testing regime as from 1 September, exactly one year after the test was introduced for all passenger cars. In fact, more than half of all EU countries posted declines in September (16 in total), with the United Kingdom (-23.5%) and Germany (-11.2%) recording double-digit losses last month.

New heavy commercial vehicles (HCV) of 16t and over

In September, registrations of heavy trucks recorded a year-on-year decline for the third month in a row, falling by 13.8 per cent to 22,887 units last month. Indeed, all key markets of the European Union recorded weak performances last month, especially Italy (-22.9%) and Germany (-16.3%).

Last month, demand for new trucks was 13.4 per cent lower across the European Union than in September 2018. As was the case for the heavy-duty segment, all major EU markets saw registrations fall in September. Italy (-22.7%), Germany (-12.3%) and the UK (-11.3%) posted double-digit declines.

In September 2019, EU registrations of buses and coaches were 6.7 per cent lower than last year. Growth in the key markets was mixed. After a very strong performance in August, Spain saw a double-digit drop (-28.8%) last month. By contrast, French (+11.1%) and Italian (+5.6%) registrations increased in September. 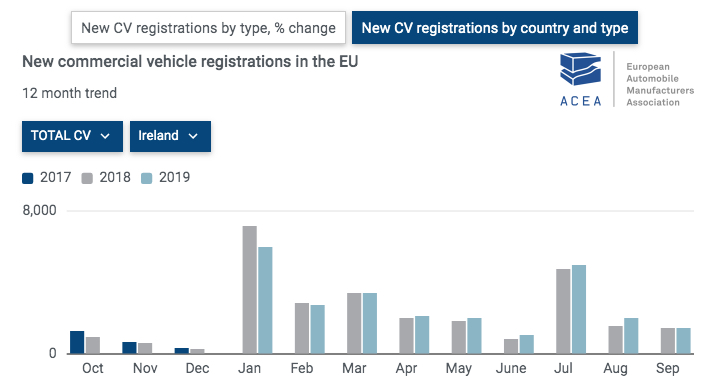