Van, Truck, Trailer, Bus and Coach Aftermarket News in Ireland
Menu
HomeNewsParts2,000 hydrogen fuel cell HGVs on Irish roads by 2023
According to a new report, there will be 2,000 hydrogen HGVs, plus 880 bus/coaches, and 6,800 vans in addition to 29,000 cars on Irish roads by 2023. It declares that this would have the potential for over 35,000 hydrogen vehicles on our roads within a decade. It calculates that this would remove approximately 300,000 tonnes of CO2 from our atmosphere every year. 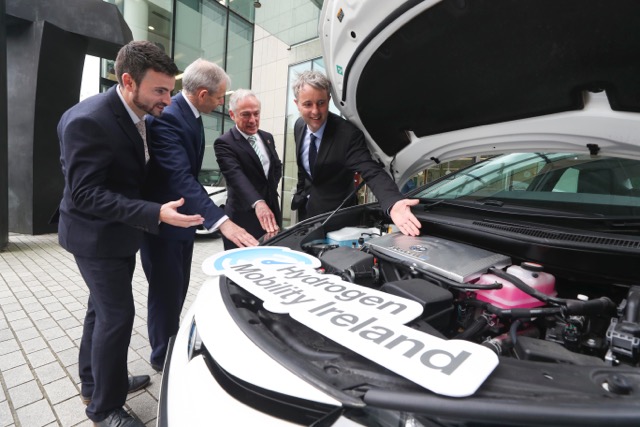 These are among the findings of the first ever published research into the potential for hydrogen to help solve Ireland’s green house gas emissions from transport. The authors claim that this report provides the Irish Government with a potential roadmap to assist the decarbonisation of Irish transport.
Transport accounts for approximately 20 per cent of Ireland’s total greenhouse gasses and is by far the largest source of energy-related CO2 emissions in Ireland. In 2017 it was responsible for 39 per cent, and it is also the sector where CO2 emissions are growing the fastest.
Hydrogen is a very low carbon fuel and will be produced locally in Ireland. Hydrogen fuel cell vehicles consume hydrogen as a fuel to produce electrical power for the vehicle, with water vapour the only by-product.
They can complement battery electric vehicles as they offer greater range and faster refuelling, can be used at short notice, and are particularly suitable for heavy passenger and goods vehicles.
A group called Hydrogen Mobility Ireland (HMI) has formed to address bringing hydrogen transport to Ireland, which consists of leading transport and energy companies along with policy stakeholders and representatives of other hydrogen initiatives.
They have set forward the business case and rationale for both the private sector and Government to support the provision of hydrogen fuel cell vehicles.
The report found that Ireland should follow the lead of countries like China, US and Japan who have committed to each having in the region of one million hydrogen fuel cell vehicles by 2030.
HMI says that among the findings was agreement that the Government should apply similar incentives to hydrogen fuel cell vehicles as they do to battery electric vehicles currently.
Hydrogen vehicles will be cost-competitive with conventional fuel vehicles by mid next decade. Buses, vans and taxis could be deployed as the catalyst for market establishment.
The report also recommended building clusters of refuelling stations to give early adopters confidence
It suggests that a first deployment project involving two hydrogen production sources and three refuelling stations are presented. This can be done at a cost of €34 million, and will require €14m of funding from Government.
By 2030, a network of 76 stations would ensure that 50 per cent of the population of the island would live in a town with a hydrogen refuelling station as well as providing adequate coverage of major roads, while a network of 27 electrolysers collocated with renewable generators (mostly wind farms) would supply the hydrogen fuel
In a positive adoption scenario this will lead to a national fuel call fleet of 2,000 HGVs, 880 bus/coaches, 6,800 vans and 29,000 cars by 2030
Hydrogen could abate 300,000 tonnes CO2 annually (2% of transport emissions) with the potential for this to significantly increase in the 2030s. The cost of this abatement would be between €75-100/tonne.
Among the membership of Hydrogen Mobility Ireland from the automotive sector includes: Harris Group/LDV, Hyundai Ireland and Toyota Ireland.
At the launch of the report today at Bord Gáis Energy’s headquarters, Minister Richard Bruton TD, Minister for Communications, Climate Action and the Environment, said, “The Climate Action Plan, launched earlier this year, commits to over 180 actions across every sector of society to step up our response to the climate challenge. These actions were chosen based on an assessment of the least cost, least burden options currently available.
The plan is a rolling plan, designed to integrate best practice as it emerges and adapt to emerging new technologies. I welcome this research as a valuable insight into a potential pathway for the introduction of hydrogen vehicles in Ireland between now and 2030.”
Chairman of Hydrogen Mobility Ireland and Corporate Affairs Director at Toyota Ireland, Mark Teevan, said: “At Toyota we see hydrogen fuel cell vehicles as having a very big role to play in a full decarbonisation of transport. The challenge is to get started since not only is a new infrastructure needed but also the production of a new fuel. With Hydrogen Mobility Ireland, we have started the process of coordinating industry’s response to this challenge whilst also planning to align with academic and policy thinking. This report is the first output of HMI and leads us to the next part of the challenge which is to implement our findings.”
Some hydrogen mobility Ireland members are already planning on initiating hydrogen production in Ireland, including Indaver at its waste to energy plant in Co Meath.
CIÉ welcomes the launch of the Hydrogen Mobility Ireland report which represents another important step in Ireland’s transition to a low carbon transport sector. As part of this project, the CIÉ Group of Companies – Dublin Bus, Iarnród Éireann and Bus Éireann – provided valuable operational and engineering expertise to the working group.
Lorcan O’Connor, CEO of the CIE Group, commented: “As Ireland’s largest transport operator, CIÉ plays an important role in tackling the sustainability challenge including the reduction of CO2 emissions in the transport sector, improving air quality and reducing congestion. Car dependency will be further reduced as future developments on CIÉ lands are based upon the principles of Transport Orientated Development.”
Andreas Bieringer, Managing Director of BOC Gases Ireland, commented: “BOC Gases is delighted to be part of Hydrogen Mobility Ireland’s project and the launch of this report. We believe in hydrogen. It is a clean indigenous fuel that will provide energy solutions for many industries in Ireland. BOC’s parent company Linde has been intensely engaged in the use of hydrogen as an emission-free fuel for over 25 years, and we now believe hydrogen is no longer a fuel of the future but one of today. Decades of research, development and testing have shown that hydrogen technology is a workable, clean and economically viable alternative suited to mass deployment. Hydrogen-powered vehicles have a long-distance range and can be rapidly fuelled, which allows their deployment to compliment electricity as a zero carbon transport fuel.”