Van, Truck, Trailer, Bus and Coach Aftermarket News in Ireland
Menu
HomeNewsUsed van prices in UK on the up

Used van prices in the UK are on the rise, according to vehicle remarketing and auction company Aston Barclay. 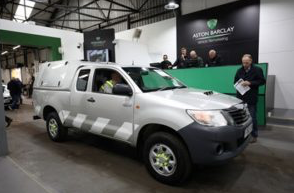 Double cab pick-up mileages meanwhile were down to an average of 76,442 with age falling to70.5 months.

Geoff Flood, Aston Barclay’s commercial vehicle sales manager, said, “We have seen a change in the profile of stock coming into the auction over recent months. Used vans are generally younger and with fewer miles on the clock which may signal a change in fleet replacement cycles as well as vehicles travelling fewer miles. Double cab pick-ups are workhorses and recreational vehicles and have a strong following in the used market. Corporate users are replacing these vehicles more often, probably because new prices and deals are very keen and residuals are strong.”