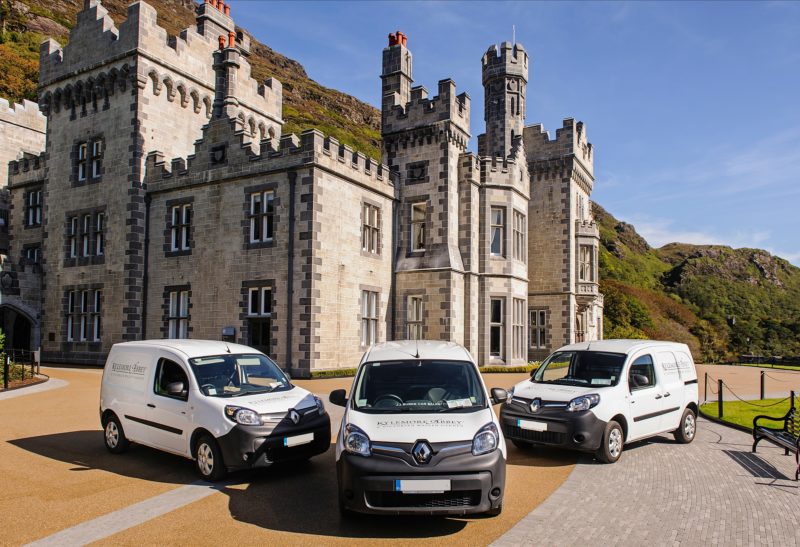 The electric vans will be used by staff, maintenance, groundskeepers and cleaners in the course of their duties on the grounds and will be the only vehicles permitted on the newly landscaped area around the Abbey.

Kylemore Abbey is undertaking an ecology and biodiversity review which is assessing how it can reduce its environmental impact and take proactive measures in all areas of the business. It plans to have supplemented the initial three electric vans with a further six over the next two years and is also examining how best to electrify or decarbonise the existing fleet of shuttle buses. It plans to be carbon neutral within the next five to seven years.

Kylemore Abbey and Gardens welcomes in excess of half a million visitors annually and earlier this year launched a new multi-million-euro visitor experience, ‘From Generation to Generation’.

There is currently one staff charging point onsite which will be used for the Kangoo Z.E. fleet, and Kylemore Abbey aims to install public charging points in the near future.

Patrick Magee, Country Operations Director Renault Ireland, said: “The Kangoo Z.E. is the perfect addition to the fleet at Kylemore Abbey with zero emissions and low running costs. We are delighted to support this much-loved visitor attraction in its journey to becoming carbon neutral. We commend the team for their work in preserving the history and beauty of the estate. We wish them all the best with their efforts and safe and happy driving in the Kangoo Z.E.!”