Optimised engine operation is essential to maximise engine power, with the lowest possible exhaust emissions and fuel consumption. Modern vehicles are now reliant on computer systems. Whether it is a decision about when best to ignite the fuel, or how much fuel and air to allow into the cylinder, computers are analysing and sharing information to make key performance decisions.

Sensors are vital for feeding information into the electronic control units (ECU). The data they gather is sent to the ECU, which then controls various valves and injectors to ensure optimum combustion.

febi supplies a range of over 1,500 engine sensors and actuators, covering more than 65,000 European and Asian vehicle applications. Included in febi’s engine management range are:

EGR Valves
EGR valves (Exhaust Gas Recirculation) reduce the level of nitrogen in the combustion chamber by recirculating exhaust gases. This lowers the temperature reached during the combustion process, increasing fuel efficiency. febi have over 130 EGR Valve available articles in range to fit more than 4,600 European and Asian applications.

Crankshaft & Camshaft Sensors
febi has more than 260 crankshaft & camshaft sensors for over 25,000 applications. These sensors measure the speed and position of the cam and crankshaft. The signal emitted is processed by the ECU to improve the accuracy of the ignition and fuel timing.

Air Mass/ Air Flow Metres
febi has more than 260 crankshaft & camshaft sensors for over 25,000 applications. These sensors measure the speed and position of the cam and crankshaft. The signal emitted is processed by the ECU to improve the accuracy of the ignition and fuel timing.

Ignition Coils
febi supply a range of more than 260 ignition coil articles for over 25,000 applications. There are several different design and technological variations of the ignition coil, fundamentally controlling the sequence and current to the spark plugs.

Throttle Body
The ECU has responsibility for helping to control the throttle valve inside the throttle body, receiving feedback from the throttle position sensor. The throttle control also plays an important role in reducing emissions and for managing clean air for the EGR. febi supply over 80 throttle body articles for over 3,200 applications.

Lambda Sensors
The lambda sensor – also known as an ‘Oxygen Sensor’ – operates by monitoring and measuring the quantity of oxygen in the exhaust. Improving the efficiency of the combustion engine, the lambda sensor determines the levels of oxygen and sends the information in data format to the Engine Control Unit (ECU). febi has an extensive range of lambda sensor articles to fit a variety of vehicle applications.

Popular parts in the range include: 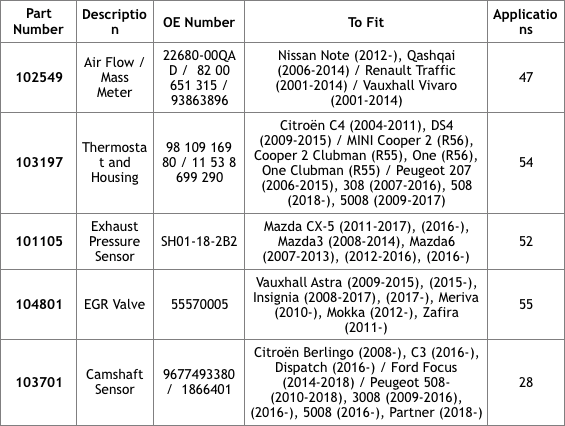