Rob Darroch (22) joined some of the UK’s top apprentices in the heavy vehicle industry this year, as he took part in this year’s prestigious World Skills UK competition.

The heavy-vehicle apprentice technician from the Wirral has been working for Scania specialist, Haydock Commercials, at Ellesmere Port for the past three years. 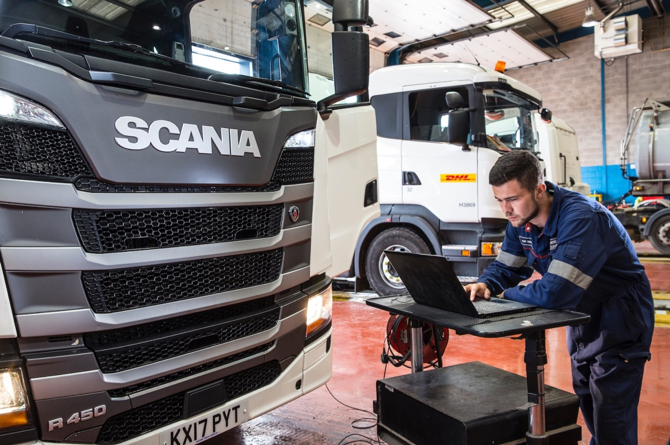 He was nominated by his development coach at national training provider, Remit Training, for this year’s World Skills UK competition. Making it through the application stage, Rob has been selected for the qualifying rounds. He said: “It was a big deal to be nominated to compete in World Skills UK. It’s a massive competition and I really wanted to do well.”

Rob joined other World Skills nominees from across the UK to take part in time managed practical skills assessments to determine whether he should make it through to the final six in his category, and attend the World Skills UK finals at the NEC in Birmingham in November 2019. The winners of these finals then have the opportunity to be selected for the UK squad to compete internationally.

The list of finalists will be announced in next month.

Before joining Scania on their apprenticeship scheme, Rob had been working for a well-known fast-food chain as an engineer, helping to fix machines. He said: “It was ok for a while, but after two years, I was ready for something else, I wanted more of a challenge and something I thought I would enjoy. I saw the apprenticeship come up with Scania, and I just thought “yeah, ok then, I’ll give that a go.”

Working in the motor industry, and more specifically with heavy vehicles, wasn’t a lifetime ambition for Rob, however he’s pleased he made the decision to give it a go.

“To be honest, when I first came here, I was just out there looking for a job,” said Rob. “But that’s all changed, as I really enjoy what I do here now and I’m ok at doing it, I think.

“There’s not many people that do what I do, particularly at my age, but I see that as a good thing, it gives me a chance to stand out.”

Rob’s apprenticeship has taken him to NVQ Level 3 and he’s about to complete his qualifications, following a final assessment with his Remit Apprentice Development Coach.

“I’m looking forward to getting those qualifications and completing my training. I have enjoyed it though. I’m hoping there’s more I can do in the future to pursue further qualifications. I think Scania is the sort of company to support me in that, which is another reason I’m really pleased to be here.”

Rob’s boss, Mark Urmston, Depot Manager at Ellesmere Port Scania, said: “We’re of course incredibly proud of Rob, for not only completing his apprenticeship to a high standard, but being a part of the World Skills UK competition. It’s something I’ve never had the chance to do in my career, and I know many others haven’t either. We all can’t wait to see how he gets on!”