Following on the success of its new F-MAX tractor, winner of the International Truck of the Year award, Ford Trucks raised its growth target and signed an agreement with TIP Trailer Services to expand its aftersales network in Western Europe. 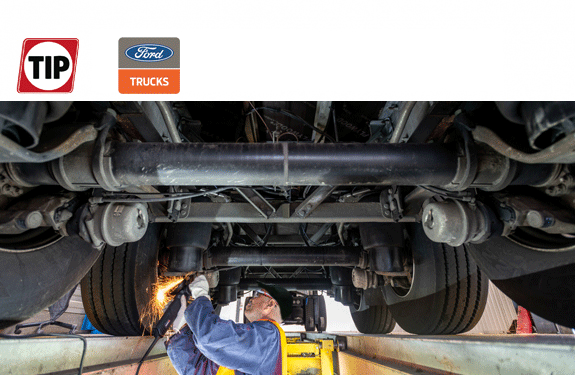 Following on the international success of its new F-MAX tractor, which had its world premiere at the IAA Hannover Commercial Vehicles Show and won the International Truck of the Year award, Ford Trucks has reached an agreement to rapidly increase the number of its service locations in Western Europe.

On the award win last year, it was strange that this jury announced the award at the same event that that the new truck made its public debut. And it’s really strange that according to their website (www.fordtrucks.com.tr), Ford Trucks still do not have a sales presence in any country that the 23 jury members are supposed to represent. How could it be International Truck of the Year? And this is also an award that is really European, as opposed to global. There are no United States, Canadian, Chinese, Japanese, Indian, or other major non-European countries with jury representation.

Anyway, back to the current story and after establishing a presence in the Middle East, Africa, Russia and the Turkic Republics, Ford Trucks says that it continues to grow with new dealers in the European market while accelerating efforts to increase the number of countries to 51 by 2020.

Under the agreement signed between Ford Trucks and TIP Trailer Services, the leading aftersales service provider in Western Europe, TIP will provide warranty services as well as proactive services to Ford Trucks vehicles in the region.

Commenting on the partnership, Ford Trucks Vice President Serhan Turfan said: “In the global arena, Ford Trucks is rapidly growing as a company that combines nearly 60 years of truck production experience with the ability to develop products specific to different export markets. The worldwide appreciation and acclaim for the F-MAX, which we developed from scratch, has been an important driving force that has increased our international growth target. In parallel with our growth target in Western European markets, the cooperation with TIP Trailer Services will contribute significantly to our goal of continuous customer support. We believe that this cooperation will bring very fruitful results for both parties.”

TIP Trailer Services Chief Operating Officer Paul Beadle said: “We are very pleased to enter this cooperation and look forward to supporting Ford Trucks on their strategic growth journey in Western Europe. We believe that this is a tremendous partnership for both sides and will provide many benefits.”

TIP Trailer Services is one of Europe’s leading equipment service providers. It specialises in trailer leasing, rental, maintenance and repair, as well as other value-added services, and provide these to transportation and logistics customers across Europe. Headquartered in Amsterdam, it services their customers from 102 locations spread over 17 countries in Europe.

TIP Trailer Services Ireland Ltd. is based at the Airport Business Park, Swords Road, Cloghran, in Dublin. It can be contacted at: 01 844 4144.