Scania’s range of 13-litre engines is now being complemented by a 540 hp version. The new engine is primarily intended for applica­tions and customers where lots of power and drivability are in demand while weight sensitivity or limitations such as front-axle loads hinder the use of Scania’s slightly heavier V8 engines which start at 520 hp. 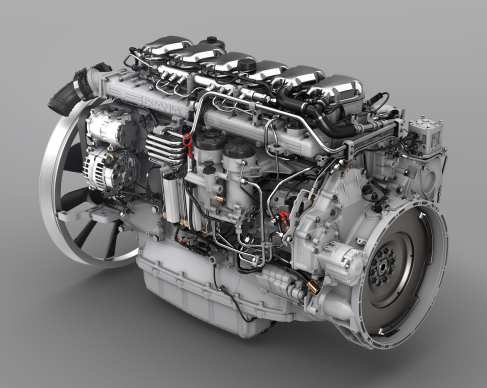 Introducing new uptime features
Scania says that it is also introducing several features and improvements that all share a commitment to uptime by adding features and functionality that help ensure that the truck will be fit for operation.

Fuel thefts from trucks are a major problem for many haulier in different regions. The main problem is not always the value of the stolen fuel – although it is annoying – but the fact that the truck might be halted for hours before being able to continue.

“Keeping trucks fit for operation day in and day out is one of the most important factors in our industry today,” says Alexander Vlaskamp, Senior Vice President, Head of Scania Trucks. “By introducing smart, connected services such as a fuel theft alarm, we offer our customers increased control and better odds that their trucks will be available as intended.”

Scania claims that it has developed an alarm function that works locally and, if the customer has Scania’s Control package, also sends SMS and e-mail notifications via the Fleet Management system. When activated, the alarm system monitors the fuel level for up to 65 hours, provided that the truck’s master battery switch is activated. If the fuel level suddenly drops by four to eight percent (depending on the tank size), the alarm siren goes off.

“If someone tampers with your vehicle, you are alerted and the consequences of having fuel stolen can be avoided or at least mitigated,” says Vlaskamp. “This offers peace of mind for our customers since unplanned downtime can be avoided.”

Avoiding mishaps under busy load cycles
Scania also says that it is now introducing improved load handling for swap body trucks that are handling containers or other superstructures. When using the air suspension for raising or lowering the truck under the actual body, it is of great importance that the movement is only vertical. Then challenges like getting the truck in the right position or, when off-loading, running the risk of damaging the support legs by horizontal movement, can be avoided.

This is especially crucial for trucks with steered tag axles since they tend to move differently due to the separate air bellow system on the tag axle. Scania says that it has removed this hazard by introducing a feature that automatically releases the brakes on the tag axle. With the wheels rolling freely, no forces are transferred from the tag axle that can move the truck out of the desired position.

Via the built-in Scania C300 Communicator, this data is then sent to the customer’s FMS system (provided that the customer has Scania’s Control Package service). This means that all crucial vehicle and superstructure data is stored in one place, with easy access. It also means that the initial investment for getting access to monitoring data is reduced.

“Connected bodywork means increased control for the haulier”, says Alexander Vlaskamp, Senior Vice President, Scania Trucks. “Sensitive loads like frozen food can be monitored and documented during the whole transport, thus ensuring that they have been handled correctly all the way